Buzz: "Now, you're sure this space freighter will return to its port of origin once it jettisons its food supply?"
Woody: "Uh-huh. And when we get there, we'll be able to find a way to transport you home."
Buzz: "Well, then, let's climb aboard."
Woody: "No, no, no, wait! Buzz! Buzz! Let's get in the back; no one will see us there."
Buzz: "Negative! There are no restraining harnesses in the cargo area. We'll be much safer in the Cockpit."
"Yeah, but, Buzz! Buzz! (pause) Buzz! (to himself) 'It'll be safer in the cockpit than the cargo bay.' What an idiot!"
—Woody and Buzz Lightyear, as they discuss how they will hitch a ride in a Pizza Planet truck

"Oh, I seriously doubt he's getting this kind of mileage."
—Hamm, reading the manual of the truck
"Guys, we can't park here; it's the white zone!"
—Rex, after the toys stop the truck at the airport
Woody: "Buzz! Buzz, come back!"
Buzz: "Go away!"
Woody: "No Buzz, you gotta come back, I...I found a spaceship! It's a spaceship, Buzz!"
—Woody labels the Pizza Planet truck as a spaceship in order to call Buzz Lightyear back 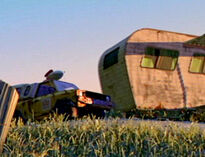 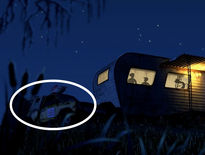 The Incredibles: The Video Game
Whilst Dash is running on the motorway at super-speed. Note: It does not make an appearance in the movie.

Cars
During the Life is a Highway sequence, in front of a Dinoco station, thus echoing the scene in Toy Story 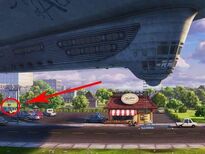 Up
Seen in the parking lot behind the curb where Russell and Carl are sitting at the end.

Toy Story 3
Lotso, Chuckles, and Big Baby ride on a Pizza Planet truck's rear bumper in the rain at night to get from Daisy's house to Sunnyside Daycare. 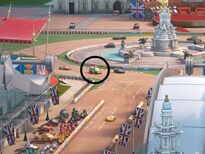 Cars 2
Todd has been spotted in the Cars 2 triptych poster, in the middle London portion, near a fountain in the background.

Cars 2
Todd at the Radiator Springs Grand Prix.
Add a photo to this gallery

Retrieved from "https://pixar.fandom.com/wiki/Pizza_Planet_Truck?oldid=77723"
Community content is available under CC-BY-SA unless otherwise noted.