Ponchy Wipeout races for the team "Bumper Save" in the movie Cars and Cars 3.

"Ponchy was working as a stunt double on a movie about a pair of wise-cracking California Highway Patrol officers called "HighJinx" when he was spotted and recruited to be a professional race car. Ponchy's gone from the big screen to the little screen, but at least it involves a lot less intentional crashing."[1]

Ponchy Wipeout returns in Cars 3, though he has gone through a design change sometime since the events of the first film. One major difference is his eyelids turning from cyan to black.[2] In the film, he competes in the 2016 Piston Cup season, though struggles with Jackson Storm and the next-generation racers. At the end of the season, he either retires or gets fired and is replaced by Paul Conrev, the next-generation Bumper Save racer.

Wipeout spinning out on the MSS 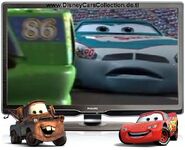 Cars 3 Die-cast
Add a photo to this gallery

Retrieved from "https://pixar.fandom.com/wiki/Ponchy_Wipeout?oldid=199757"
Community content is available under CC-BY-SA unless otherwise noted.