"This is getting nowhere fast. We really should go, Grandmother."
—Prince Wheeliam, to The Queen

Prince Wheeliam is a character in Cars 2.

Prince Wheeliam of the United Kingdom is an avid racing fan. He can’t believe his luck that the final race of the one-of-a-kind World Grand Prix is happening on the streets of London. Though he must remain impartial when by his grandmother, The Queen's side, he is privately rooting for his fellow Brits Lewis Hamilton and Nigel Gearsley to cross the finish line first.

Prince Wheeliam stood by his grandmother and Sir Miles Axlerod as the final race of the World Grand Prix. As they watched the race from their platform, they all spotted Lightning McQueen chasing a backwards-driving Mater. Confused at this strange spectacle, Wheeliam directs his eyes back to his grandmother.

Later on, Mater and McQueen arrive at Buckingham Palace. Mater then stated that he knew who was sabotaging the race. But when he took a moment to bow respectfully to the Queen, everyone noticed the bomb on his air filter and went into a panic. Finn McMissile intervenes before the guards could shoot, and ordered Mater to stand down. However, Mater then accused Axlerod of being the head Lemon, stating a variety of reasons and theories. As the time on the bomb was close to detonation, Wheeliam believed that Mater was going nowhere with his accusations and pleaded his grandmother to get to safety, but was declined, as the Queen wanted to see where the tow truck was going with this. But with fifteen seconds left, the entire royal party cleared out. Thankfully, the bomb did not go off as Axlerod deactivated the bomb at the last second, proving Mater's accusations.

Prince Wheeliam, The Queen and Axlerod

Prince Wheeliam with the Queen

The Prince on a poster 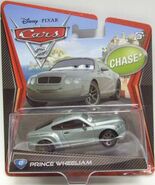 The die-cast model
Add a photo to this gallery
Retrieved from "https://pixar.fandom.com/wiki/Prince_Wheeliam?oldid=177204"
Community content is available under CC-BY-SA unless otherwise noted.