"You see, Hopper. Nature has a certain order: The ants pick the food, the ants keep the food, and the grasshoppers leave."
—Princess Atta to Hopper

Princess Atta is one of the major characters in A Bug's Life.

Atta is the crown princess ant, the eldest daughter of the Queen of the ant colony and heir to the throne of Ant Island. During the opening of the film, she’s close to inheriting the crown from her elderly mother. She’s neurotic throughout the film, regarding her newfound responsibilities, and often worries about what the rest of the colony thinks about her. She is also Flik's love interest.

During the film, it is shown that she has a small crush on Flik, whereas at the beginning of the film, she does not show much appreciation for him at all, especially when she gets crushed by a stalk that Flik has cut down with his latest invention. When Flik accidentally destroys a pile of food gathered for the grasshoppers, causing Hopper, leader of the grasshoppers, to double the amount of food offering the ants must gather before the next autumn, Atta initially sentences Flik to dig in the tunnels for one month, but comes to accept his decision of going to the city to recruit some warrior bugs (assuming that Flik will not be around to cause any more trouble).

When Flik returns to the island with the circus troupe he has mistakenly recruited, Atta becomes suspicious of the circus bugs and demands Flik to tell what is happening about them. However, after witnessing a nearly deadly bird attack in which Flik and the circus bugs save the life of her little sister Dot, Atta sees that the circus bugs may be warriors and warms up to Flik (and the circus bugs) as she apologizes to him for mistreatment. When Atta tells Flik that Hopper is afraid of birds, Flik kisses her and she gets touched. When the circus bugs present the plan to build a makeshift bird that can be controlled from the inside (an idea passed from Flik), Atta takes this plan and announces to the ants that they will work together to scare away Hopper should he return to the island.

While the ants build the bird model, Atta starts to realize Flik's crush on her when she notices him staring at her in a different way and her feelings for him seem to grow slightly stronger, as she later thanks Flik for finding the "Warrior Bugs," getting her antennae tangled with Flik's in the process. However, when P.T. Flea arrives and exposes the truth about the circus bugs, Atta becomes upset with Flik, and seeing him through his craziness and lies, she has him banished for good (Something she would later regret). After that, she orders the ants to gather up whatever food they can find on the island, but they are unable to satisfy the quota demanded by Hopper, which leads to him taking control of the island.

That night, Flik, who has secretly returned to the island upon hearing from Dot that the grasshoppers are going to squish the Queen after all the food on the island has been gathered, exposes the truth behind Hopper's need for the colony. Atta and all the other ants listen to Flik's speech, and they all become astonished to realize what the grasshoppers have been putting them up to. When Flik is beaten up by Hopper, she rushes in to his defense. In support of what Flik has said, Atta demands that the ants pick up the food, the ants keep the food, and the grasshoppers leave. She helps Flik up, expressing her proudness toward him for his bravery and outspokenness. When Flik is kidnapped by Hopper, the circus bugs attempt to give chase, but it is Atta who rescues him from Hopper. Under Flik's instruction, she takes him across the stream where the bird's nest is located and watches worriedly as he deals with Hopper. When the bird catches Hopper, Atta pulls Flik to safety and they hide while cringing as the bird lowers Hopper into its chicks' beaks.

Atta later makes up with Flik and allows him back into the colony. At the conclusion of the film, when the circus bugs are about to leave the island, she thanks them for giving back the colony's hope, dignity and lives and receives a rock, which has magically appeared by Manny's tricks, as a gift. When the ants applaud Flik for his heroism, Atta shows her love for him by kissing him. The Queen then crowns Atta as the new Queen. Atta tosses her tiara to Dot as the new princess. As Flik says good-bye to his friends, Atta and Dot fly him to a tree root for a better view. There, Atta hold hands with Flik, her chosen mate, as they, along with Dot, wave good-bye to the departing circus troupe. 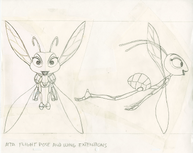 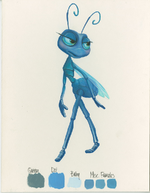 (Atta) What did you do (Flik) It was an accident

Atta's name on the wall in Toy Story 3

Atta Going checking to the bird