Maitreyi Ramakrishnan
Priya Mangal[1] (born c. 1989) is one of the main characters in Pixar's 2022 animated feature film, Turning Red. She is one of Mei's best friends.

Priya is presented to be the most chill and mellow of the four girls while also being supportive of them and having their back. Despite being deadpan and stoic most of the time, she tends to act as excitable as the rest of her friends. Priya is interested in anything that's macabre. She is seen reading a vampire romance novel during her introduction scene and also ask's Mei if she's a werewolf after seeing her red panda form. She often makes vampire-like poses like crossing her arms when she's lying down and she also said that she always wanted a tail. Priya's gothic interests are further displayed at Tyler's party when she acts out mortality for a charades game and when she utters the phrase "Thank Cthulhu," after Mei finally arrived at the party.

Priya is an average height, Indian-Canadian, 13-year-old teenage girl with brown eyes, thick eyebrows, and curly, wavy, brownish-black hair that falls right past her shoulders; her bangs are parted and slightly curled. She wears navy glasses with mini gold hoop earrings and a gold nose piercing. Her clothing consists of a stripy yellow shirt with a small zipper on the top of it, baggy pants that feature pockets and grey sneakers that have blue lacings. She also wears a grayish-yellow watch on her right arm, black nail polish and a rainbow friendship bracelet on the left. 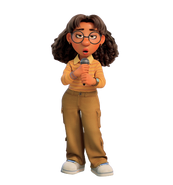