Cars 2
Professor Z, short for Zündapp, is the main antagonist in Cars 2. He is Miles Axlerod's boss.

"Professor Z, aka “The Professor,” is an internationally-wanted weapons designer in a small, sophisticated German package. He is a brilliant but mad monocle-wearing scientist who is plotting to sabotage the World Grand Prix. Though his true motive is unclear, Professor Z is willing to do whatever it takes to eliminate all obstacles and keep the “project” on schedule."[1]

During the film, it is learned that the Professor is not the main villain, nor is he the leader of the lemon cars. As it turns out, he is actually working for WGP creator Sir Miles Axlerod. Since Professor Z is a scientist, Miles Axlerod has him invent an electromagnetic pulse device, which is disguised as a World Grand Prix camera, to use on the racers that use the gas Allinol. This was all part of a plan to turn the world against alternative energy and have all cars rely on gasoline, bringing profits to the lemon cars and himself due to the fact that they own the largest untapped oil reserves in the world.

It turns out that Professor Zündapp and Axlerod engineered Allinol not as alternative energy, but actually made it from gasoline that would expand and eventually explode upon being in contact with the electromagnetic pulse.

Following the sabotage of the Italy race, it would seem that Allinol was finished, until Lightning McQueen announced that he would use Allinol for the final race in London. Professor Z then received instructions from Axlerod to kill McQueen during the race. However, they then discovered that Mater had infiltrated the meeting disguised as Ivan, who escaped to warn McQueen but the lemons managed to capture him, alone with Finn McMissile and Holley Shiftwell.

The lemons then moved to London to enact the final stage of their plan. However, they were unaware that Sarge had secretly switched McQueen's Allinol with Fillmore's organic fuel, making him immune to the EMP. Thus, Zündapp ordered Acer and Grem to switch to the backup plan: they'd trick Mater into thinking that they planted a bomb in McQueen's pit for what he returns there, when in truth the bomb was hidden in Mater's air filter, at which the tow truck would escape due to being held by thin frayed ropes and attempt to warn McQueen, before Zündapp remotely detonates the bomb. However, Finn and Holley managed to escape also and discover the plot and managed to get a warning to Mater. Mater then attempted to get some distance from McQueen as the racecar chased him. But just as he managed to snag Mater's hook, the tow truck activated his rockets, causing the tow to race out of range of the detonator, to Zündapp's fury. Then spotting Holley hovering outside his window, guns drawn, Zündapp panicked and fled. He attempted to get to Tony Trihull but Finn caught up to him and snagged him by the bumper with his grappling hook. However, Tony drew the two towards him with a giant magnet, causing Zündapp to lose his monocle and Finn most of his weapons, as the warship targeted the spycar with missiles. However, Finn released multiple mini-bombs, which killed Tony and allowing him to capture Zündapp.

Brought before McQueen, Mater and Holley, the Professor demanded to know why his death ray didn't kill the racecar. Finn then ordered him to turn off the bomb. Zündapp confessed that the bomb is voice activated. But as Mater finds out, only the car who armed it could deactivate, starting a five-minute timer. Holley threatened Zündapp, who confessed that he didn't arm the device, shaving off another minute and casually asked if anyone else would like to try, before being tazed by Holley. He ultimately is arrested in London with Axlerod and the remaining lemons for their crimes.

Mater: "Let me go!"
Professor Z: "You actually care about that race car. A pity you didn't warn him in time."
—Mater gets tied up and put in the lemons' truck.

Professor Z: "You! Why didn't my death ray kill you?!"
Lightning McQueen: "Death ray?!"
Finn McMissile: "Turn off the bomb, Zündapp!"
Professor Z: "Are you all so dense? It's voice-activated. Everything is voice-activated these days."
Mater: "Deactivate! Deactivate!"
Bomb: "Voice denied." (the bomb activates to explode in 5 minutes)
Mater: "Huh!"
Professor Z: "Oops! Did I forget to mention that it can only be disarmed by the one who activated it?"
Holley Shiftwell: (unfolds her shock guns) "Say it!"
Professor Z: "Deactivate."
Bomb: "Voice denied." (a minute was taken off the timer)
Mater: "Wha...?!"
Professor Z: "I'm not the one who activated it. Would anyone else like to try?" (gets shocked by Holley's shock guns) "Ah!"
Finn McMissile: "You read my mind."
Holley Shiftwell: "He was getting on my nerves."
—Lightning, Mater, Finn and Holley force Professor Z to deactivate the bomb.

Driving on the wrong side of the road 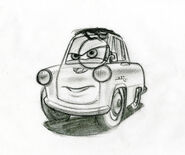 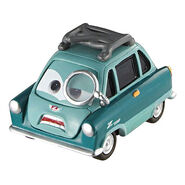 Professor Z's die-cast packaging
Add a photo to this gallery

Retrieved from "https://pixar.fandom.com/wiki/Professor_Z%C3%BCndapp?oldid=135693"
Community content is available under CC-BY-SA unless otherwise noted.