Emma Thompson
Queen Elinor is the deuteragonist of Brave. She is the Queen of DunBroch, the mother of Princess Merida and The Triplets, and the wife of King Fergus.

"A vision of grace, wisdom and strength of character, Queen Elinor is fiercely dedicated to the well being of her family and kingdom. As the measured, diplomatic counterpoint to her more impulsive husband, King Fergus, Elinor carries the weight of the kingdom on her shoulders in order to maintain the fragile peace between the volatile clans. Elinor strives to instill in Merida the knowledge and manner of a royal, expecting complete commitment to Elinor’s standards. But her vision of her daughter’s future is at odds with Merida’s rebellious spirit and desire to forge her own path, which ultimately causes Elinor to face calamitous consequences."[1]

At the beginning, Fergus gave Merida a bow and Elinor and Fergus watched Merida shoot her arrow and miss. She ran into the woods and retrieved the arrow, watched by a demon in the form of an old giant short faced bear with red evil eyes named Mor'du. He reared up, roaring at Fergus and swiped his leg off.

Years later, Queen Elinor was turned into a giant short faced bear by a witch's spell.

Bear Elinor appears in this piece of concept art of Merida and the Circle of Stones. 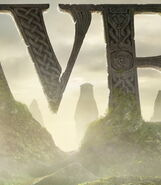 Bear Elinor's silhouette can also be spotted in the teaser poster as well.

"But are you willing to pay the price your freedom will cost?"

Queen Elinor stops the clan's fighting by walking through them to reach their leaders.

Elinor furious at Merida for her actions during the tournament

Elinor warning Merida of her actions

Elinor in the stream trying to catch fish

Queen Elinor, as a bear, reaching to save Merida from Mor'du.

Elinor and Merida riding their horses 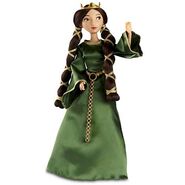