"Number 117, Ralph Carlow, is the little brother to famous Hollywood actor Jordon Carlow. The two brothers had little respect for what the other did for a living, but when Jordon got a role playing a race car in the film "Racing Hearts," he was forced by the studio to spend time shadowing his brother Ralph. After two long months of research, Jordon came away with a new respect for how hard racing really is, and after seeing his brother's performance in the film, Ralph gained a new respect for acting. Since then Jordon never misses a race and Ralph never misses a premiere."[1]

Ralph Carlow appears in Cars: The Video Game, with the name ''Lee Jr''. He is the fastest car in Palm Mile Speedway and the ''slowest'' (as there are still 15 cars slower than him) in Motor Speedway of the South.

Ralph Carlow appears in Cars 3, competing in the Piston Cup against the next-generation racers. He is one of the veterans still racing at the Los Angeles International Speedway race where Lightning McQueen has his crash, but sometime between that and the Florida 500, he either retires or gets fired and is replaced by a next-generation racer.

Carlow spinning out during the big crash on turn three 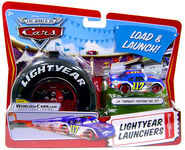 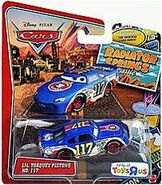 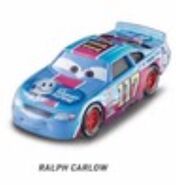 Cars 3 Die-Cast
Add a photo to this gallery

Retrieved from "https://pixar.fandom.com/wiki/Ralph_Carlow?oldid=232950"
Community content is available under CC-BY-SA unless otherwise noted.