Ramone is a main character in Cars, and a supporting character in Cars 2 and Cars 3. He is a 1959 Chevrolet Impala. He is the husband of Flo. He is the owner of Ramone's House of Body Art. He paints any car who enters his house of body art. He is a member of Lightning McQueen's pit crew.

Not only does Ramone run his own House of Body Art, Radiator Springs' local custom paint shop, but he also make sure he gives himself a new coat of paint several times a week. With his chrome undercarriage and his up-and-down hydraulics, Ramone has been the coolest car in Radiator Springs for many years, and is often seen out cruising on the main road with Flo.

Ramone has been married to café owner Flo for many years. Their relationship is as strong as the day they first met and they have become Radiator Springs' premier couple.

"A true artist isn't afraid to take chances, explore new ways to express themselves, or push the limits of culture. Ramone believes that the automotive body can be a vehicle of expression, which is why every day for Ramone is a new chance to explore new paint jobs and push the limitless boundaries of his art."[1]

Ramone owns and operates Ramone's House of Body Art, Radiator Springs' custom body and paint shop. Ramone is an artist - a true magician with paint and metal. There was a time when his only canvas was himself, so he repainted himself daily. But since Lightning McQueen helped put Radiator Springs back on the map, Ramone has had his share of customers - including the star race car himself. Before heading off to the World Grand Prix, Lightning stops by Ramone's for a new paint job, and Ramone gives him a whole new look, even adding a spoiler to him.

Ramone appears to have replaced Doc Hudson for the reparation of cars, since Doc passed away.

In the movie Ramone greets Lightning when he comes to town. He also helps the lemon, Otis get fixed up. He then later sees Lightning off at the airport. He returns in London with a paint job resembling the British flag. He also helps Lightning and Mater fight the lemons by spray painting Tubbs Pacer in the eyes.

In the movie, Ramone plays a pivotal part in the Florida 500 Piston Cup race when Lightning substitutes Cruz Ramirez into the race by having him create a custom paint job for her.

Ramone has gone through many paint jobs. Here are some of his known paint jobs:

"This cool paint job is inspired by Ramone's famous friend Lightning McQueen. Ramone can show support for his friend and look pretty sweet doing it!"[1]

"Ramone is green with envy today - he's envious of all the other cars who get to see his brand new sweet green paint job. But be careful, you can look but don't touch. This paint job is that fresh."[1]

"Ramone calls this look "Mellow Sunset." This morning he was feeling particularly relaxed about the day's schedule. Starting off with breakfast at Flo's, then back to his studio for a few hours of painting, only to quit early for the day and then pick up Flo for a nice drive up to the Wheel Well to enjoy a mellow sunset."[1]

"This paint job came out particularly nice. Ramone liked it so much he thought he'd keep it a little longer than a day, but then he came to his senses."[1]

Ramone's paint job from the short, Mater and the Ghostlight.

Ramone's paint job in Cars 2 when he goes to London. The paint job itself is designed after the Union Jack.

Ramone's paint during the epilogue of Cars 2, seen at Radiator Springs.

Ramone: "Hey, how far did you make it this time, Otis?"
Otis: "Halfway to the county line."
Ramone: "Ooh! Not bad, man!"
Otis: "I know! I can't believe it either!"
—When Otis arrives at Ramone's House of Body Art. 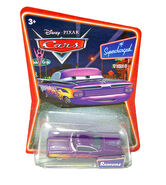 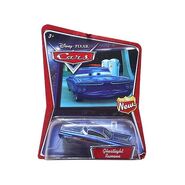 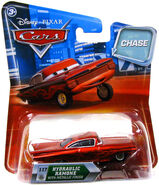 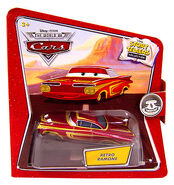 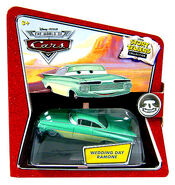 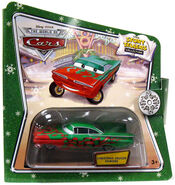 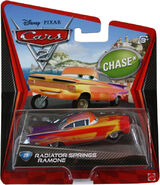