Randall is a monster that looks akin to a lizard. He has small sharp teeth, two green eyes that are nearly on top of his head, and three fronds on the top of his head. Randall is quadrupedal, with eight limbs in total. (Four legs and four arms.) Randall has three fingers and toes on each of his limbs. His skin is covered by small smooth scales that are usually dark purple in colour. The scales on his tail are blue instead of purple, like the rest of his body. Of course you can't see any of this when he is camaflauged. (Except the teeth)

In Monsters University, Randall appears to have brighter purple and blue scales. His eyes are and larger he wears a pair of convex glasses with round purple frames to help him see. These magnifed his eyes so much that it gave him a very…different…more cheerful…appearance.

Randall's scare assistant is Fungus, who usually annoys him. He usually gets into small disagreements with Mr. Waternoose, who serves as Randall's partner-in-crime. Randall resembles a lizard, with the ability to change his color from purple and blue to blend into his surroundings at will, much like a chameleon, making him invisible.

After Sulley manages to return and wreck the Scream Extractor, Mr. Waternoose tells Randall to stop Sulley, then Randall attacks and strangles him. He proves to be quite an adversary due to his cloaking abilities; he also states to Sulley how he had personally waited so long to attack him. This whole time Mike is trying to apologize to Sulley, thinking that Sulley is just clowning around as he tries to fend off his invisible foe. Mike finally gets annoyed with the fact that Sulley is not listening to him and throws a snowball at Sulley, but it hits Randall instead, exposing him to the two partners, making them realize that Randall had been attacking Sulley. Randall is defeated after a chase through the factory, where he and Boo escape into a door and Boo begins to pull on his antennas and hit him with a baseball bat, making him turn into different colors. Sulley then restrains him with a chokehold, followed by a snake wrestling maneuver, and throws him through a door that banishes him to a trailer in the middle of a swamp in the south, where a hillbilly family beats Randall senseless with a shovel, thinking he is a gator. The door's light is shattered by Sulley and then tipped over the railing it was leaning against and shatters onto the floor far below, insuring that Randall can never return. Sulley congratulates Boo for beating him and she then blows a raspberry in his direction.

Afterwards, Sulley and Mike expose Mr. Waternoose of Randall's plan to the CDA, thereby getting Waternoose arrested and foiling their plan once and for all. Mike retold the events of the film in his play Put That Thing Back Where It Came From or So Help Me, exposing Randall's conspiracy to the public; The audience watching the play are seen booing against this depiction of Randall, indicating that his reputation has been permanently tarnished by his crimes. Fungus is noticeably much happier after Randall's absence and still works as a respected employee at Monsters Inc.

Later, while Mike is studying scaring, Randy decided to bake cupcakes for a party organized by the cool kids. At the party, Randy tries to offer cupcakes to some girls that were in Eta Hiss Hiss, but Mike runs into him while riding Archie the Scare Pig, splattering four of the cupcakes on Randy that spelled "LAME" on his face, much to his dismay.

During the last part of the Scare Games, Sulley accidentally ruins Randy's attempt to scare the child dummy, as his roar is so strong that it makes him fall onto a carpet and change into a humiliating pattern of pink with red hearts (similar to a pair of cartoon boxer shorts). Due to this, his scare is weak and ineffective, giving him a poor score (7.5 points out of 20), with the OKs being tied with the Roar Omega Roar because of this. Randy swears revenge on Sulley as he is criticized by the fraternity and presumably kicked out afterwards.

In the Gameboy advanced version of the Monsters Inc. game, Randall does appear as a boss in the game. His appearance is different for his first boss battle, appearing blue and he seems to have the ability to summon ice spikes on the ground for the player to avoid and is able to teleport; this ability wasn't shown in the movie. Randell is fought the 2nd time but he is the final boss of the game. Though he loses his teleportation ability and chooses not to use his ice powers, he seems to have the ability to generate a CDA energy shield that deflects some of Sully's Roar attacks but the shield seems to vanish every 2 or 3 roars; 2 CDA employees also accompany him to make the boss battle more difficult but they can be stunned.

Randall appears in Monsters, Inc. Scream Team as the game's recurring boss. He appears during Pursuit Races and must be defeated by reaching the goal before him while collecting a specified number of Monster Tokens. Randall will always take shortcuts via Trampolines, Speedboost Arrows or Flingshots whenever possible, which the player can also take, but at the risk of not gathering enough Tokens. In the final race, Arctic Pursuit, Randall cheats by starting during the countdown.

Randall also appears as a playable character in Disney Infinity with his Monsters University design.

Randall also makes an appearance in Kingdom Hearts III as the boss of the Monstropolis level. After narrowly escaping the trailer at the end of Monsters, Inc., Randall met Vanitas, who repaired his door and lent him his Unversed soldiers to aid his quest for revenge. Insisting that laughter is unsustainable, Randall decides to gather much more negative emotions. 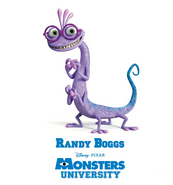 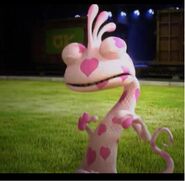