"Do you hear that? It's the winds of change..."
—Randall to Mike and Sulley

Randall is Sulley and Mike's direct rival and nemesis.

He works as a Scarer for Monsters, Inc. by entering children's rooms through a system of closet doors and scaring sleeping children to bottle their screams, which is a source of power in their world. He is in competition with Sulley and Mike for the glorious post of Top Scarer. Randall constructed a "Scream Extractor" and kidnapped a human child in cooperation with the company's leader, Henry J. Waternoose, with the hopes to eventually rise to the leader of the company.

However, the initial plot failed due to Mike sending Sulley back after closing hours to submit paperwork which Mike forgot to turn in earlier. Sulley stumbled upon the child, whom he nicknames Boo. Mike and Sulley take the child home with them, but since children are forbidden in their world, due to a belief that they can infect the monsters, Mike and Sulley are exiled when their secret is revealed. Randall and Waternoose are now able to go through with testing the scream extractor on Boo (although Waternoose expresses distaste for having to exile Sulley and Mike due to Randall's negligence, pointing out that Sulley was "twice the scarer Randall could ever be").

After Sulley manages to escape and wreck the Scream Extractor, Randall attacks and strangles him. He proves to be quite an adversary, due to his cloaking abilities. This whole time Mike is trying to apologize to Sulley, thinking that Sulley is just clowning around as he tries to fend off his invisible foe. Mike finally gets annoyed with the fact that Sulley is not listening to him and throws a snowball at Sulley, but it hits Randall instead, exposing him to the two partners, making them realize that Randall has been attacking Sulley. Randall is defeated after a chase through the factory, where he and Boo escape into a door and Boo begins to pull on his antennas and hit him with a baseball bat, making him turn into different colors. Sulley then restrains him with a chokehold, followed by a snake wrestling maneuver, and throws him through a door that banishes him to a trailer in the middle of a swamp in the south, where a hillbilly family beats Randall senseless with a shovel, thinking that he is a gator. The door is then tipped over the railing it was leaning against and shatters onto the floor far below, trapping Randall.

Randall reappears in the prequel and is nicknamed "Randy" in this movie. Instead of being sneaky, evil and impatient, he is now nerdy, shy, and nervous.

Randy is first seen when Mike arrives to his new room. The two greet each other, but Randy, startled by objects falling in the background, disappears. Mike suggests that he should use that power more often, to Randy's shock. He soon follows Mike's advice of getting rid of his glasses because they don't disappear whenever he turns invisible. Randy is worried about school and wonders if he'll manage to impress the cool kids, but Mike reassures him. He follows Mike and sits next to him on their first day of class.

Later, while Mike is studying scaring, Randy decided to bake cupcakes for a party organised by the cool kids. At the party, Randy tries to offer cupcakes to some girls, but Mike runs into him while riding Archie the Scare Pig, splattering all the cupcakes on Randy, much to his dismay.

However, Randy becomes a member of Roar Omega Roar and ends up abandoning Mike, refusing to join Oozma Kappa and help him since Randy is finally with the "cool kids". He actively participates to OK's humiliation at the ROR house, as the one who activates the trap dousing them with paint, confetti and flowers.

During the last part of the Scare Games, Sulley accidentally ruins Randy's attempt to scare the child dummy, causing him to change into a humiliating pattern of white with red hearts (similar to a pair of cartoon boxer shorts). The chameleon swears revenge on Sulley as he is disqualified and criticized by the other members of his fraternity.

In the Laugh Floor comic miniseries by Boom! Studios taking place after Monsters, Inc., Randall manages to sneak back into the factory and tries to frame Mike for stealing props and material from other Monster comics (this might be explained by Randall finding a settlement to sneak back in through the door, similar to how Sulley and Mike managed to get back to the monster world despite being banished to the Himalayas). In the fourth issue, he is helped by a human boy named Sid Phillips (an antagonist from Toy Story), and they, along with Mr. Waternoose, aim to extract revenge on Mike and Sulley in order for the antagonists to rise to power. 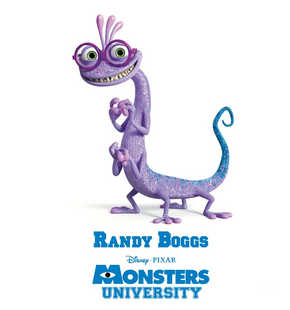 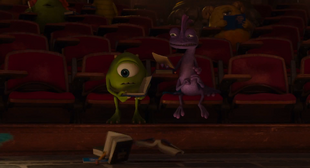 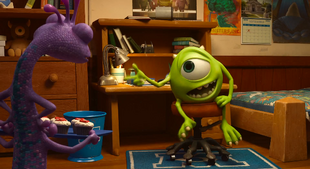 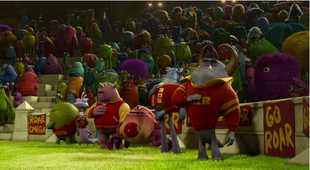 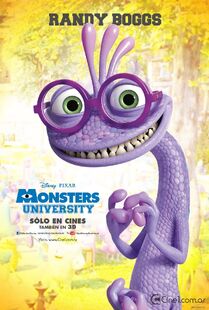 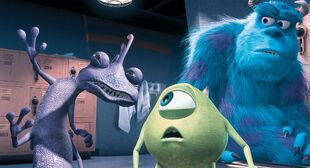 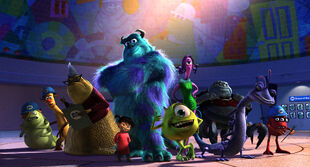 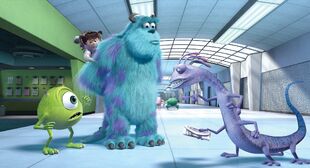 Retrieved from "https://pixar.fandom.com/wiki/Randall_Boggs?oldid=102458"
Community content is available under CC-BY-SA unless otherwise noted.