For other uses, see Red (disambiguation)

Red is a red 1950s Torchy Truck Company fire truck appearing in Cars, Cars 2, and Cars 3. He is Radiator Springs' only fire truck. He's also the the town's most sensitive resident.[1]

Red gets hot and bothered far too easily and he's been known to retreat to his fire station when things get on top of him, which seems to be most of the time. Red might be shy, but he also has a lot of friends around town who feel very protective toward him.

Red's hose is always very useful. Not only does he water all the town's flowers but he has also given Lightning McQueen a good soak from time to time.

"Red may not be a fire truck of many words, but what he doesn't say, he shows through his generous actions. Whether its putting out a tire fire or caring for the beautiful flowers, Red is there to support and protect his beloved town. Red takes negative comments on the town very personally. So if you have something bad to say about Radiator Springs, you'd better watch out, because if there's one thing Red's not afraid of, it's his emotions." [2]

Red is a fire truck from the movie Cars. He is very shy and lives in the firehouse of Radiator Springs. His usual passtime is watering the flowers that decorate Stanley's statue, which he appears to care for very much. If he gets upset, his reaction is often to burst in tears and race to hide himself behind a fence, toppling down a pile of tires in the process. He initially did not like Lightning McQueen, but eventually took a liking to him.

Upon arriving in Radiator Springs, Lightning McQueen accidentally destroyed Red's flower garden, much to his terror. Following this, Red feared McQueen for his flowers. Nevertheless, he warmed up to him. With the help of Sally, he gained the courage to blow his hose on McQueen to clean off some cactus. When it appeared as if McQueen had left without saying goodbye, Red went on to burst in tears.

"Red might not be part of Team Lightning McQueen, but someone has to tend the flowers he has around Radiator Springs. He makes sure he goes to the airport to wave goodbye to the team!"

Red reappears in Cars 2. In Cars, he was voiced by Joe Ranft who passed away in 2005. In consequence, Red does not speak in Cars 2. He appears with the other Radiator Springs residents congratulating McQueen when he comes back home, as well as when Francesco is insulting Mater and McQueen agrees to compete in the World Grand Prix. He is crying as he sees 'Team McQueen' taking off for Tokyo. He comes with the rest of the Radiator Springs residents (except Lizzie and Mack) to London after McQueen called them to try to talk to Mater, who was missing at the time. He also appears in the final battle against the lemons, where he arrives just in time to blast the Gremlins away with his fire hose. He is seen briefly when Mater and the others return to their hometown, and when they are watching the Radiator Springs Grand Prix.

Red re-appears in Cars 3. He is only seen at the beginning (when McQueen leaves to go to the Rust-eze Racing Center), at the end when he watches McQueen on TV, and when McQueen and Cruz race together around Willy's Butte.

Red appears in the Cars Toons: Rescue Squad Mater, Hiccups, Bugged, Spinning, and The Radiator Springs 500½ (and the unreleased To Protect and Serve). In Bugged, he plays as the protagonist for the first time, and is voiced by Jerome Ranft. However, he does not have any actual dialogue, except grunting and sighing.

Red in The World of Cars Online. 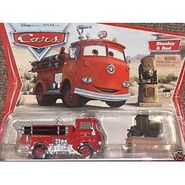 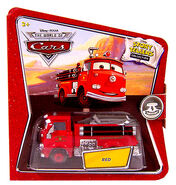