Some of Pixar's notorious Easter eggs are references to Pixar films that were still in production at the time of release, making them references to upcoming Pixar films. Although it hasn't been as consistent as some of their other Easter eggs, in recent years it has become a tradition for Pixar to put in each of their films a cameo of or an allusion to a character from their following film.

A clownfish mural in Monsters, Inc.

A Nemo model in Monsters, Inc. 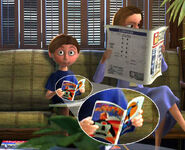 A non-anthropomorphic Luigi in Finding Nemo

A non-anthropomorphic Doc Hudson in The Incredibles

A shadow of Dug in Ratatouille

WALL•E in Your Friend the Rat

Carl Fredricksen's walking stick behind the magnifying glass in WALL•E

A Lots-o'-Huggin' Bear in Up

A poster of Finn McMissile in Toy Story 3

Engraving of Sulley in Brave

Painting with dinosaurs in Toy Story of Terror!

Forrest Woodbrush in a memory in Inside Out

Hank in The Good Dinosaur

The truck driver on the left has a Lightning McQueen Band-Aid.

The Coco background in Cars 3

Retrieved from "https://pixar.fandom.com/wiki/References_to_Upcoming_Films?oldid=213169"
Community content is available under CC-BY-SA unless otherwise noted.