Ratatouille
Your Friend the Rat

"If you are what you eat, then I only want to eat the good stuff."
—Remy

Remy is the protagonist of Ratatouille. He is a blue, average-sized rat who dreams of being a chef.

In the beginning of the film, it is revealed that Remy possesses a very strong sense of smell, able to deduce various ingredients in food. His brother Emile is readily impressed, while his father, rat clan chief, is not, but pleased when Remy is assigned as rat poison checker when he almost ate a poisoned apple core, sniffing every bit of garbage for poison, despite the fact that job is essential for the survival of the rat clan. Remy's father is also annoyed about Remy's attitude towards eating garbage, Remy claims that is unhealthy for rats and they ought to try to take the good food found in the kitchens and pantries of the humans. Therefore, Remy makes constant forages to the nearest kitchen, in an old lady's house in the countryside, where the clan is also located. Remy is also able to learn to read and understand the human language. Remy idolizes the famed chef, Auguste Gusteau, with his motto: "Anyone can cook!"

With his sense of smell, Remy slowly realizes how to improve food by combining tastes together. One day, he and his brother Emile were smoking a mushroom by the chimney, before being struck by a flash of lightning. Impressed by the popcorned mushroom, the two venture into the kitchen for saffron. The old lady is asleep, but a TV is on where Remy hears the news that Gusteau has died. The old lady awakes, sees the rats and promptly produces a shotgun where she blasts the walls and roof. Her inaccurate shooting, however, brings down part of the ceiling where the entire rat clan lives. Remy's father calls for a Dunquerque style evacuation, fleeing out to a stream and paddling off on rubbish. Remy runs back to grab a Gusteau cookbook and flees, trailing behind.

He paddles into the stream, under fire from the old lady but loses sight of the clan in the sewers. The sewers contained rapids and displaying incredible water physics, Remy is alone. Absentmindedly, Remy flicks through his cookbook's pages where an illustration of Gusteau comes to life, animated by Remy's lonely imagination. Gusteau instructs Remy to go out and look for food, Remy complies and witnesses aspects of Parisian life before surveying the magnificent night scenery and finding himself located right next to Gusteau's restaurant.

Remy climbs onto the restaurant's skylight and sees the working of a quality kitchen, where he witnesses Linguini, a clumsy garbage boy, spill a pot of soup and stuff water and various random ingredients to make up for it. Remy is horrified by this sacrilege to good food, and falls from the skylight.

Almost getting roasted, cooked, chopped and seen, Remy gets to the soup undetected and was about to make good his escape via an open window. He halts and then proceeds to add ingredients into the soup, and was caught red-handed by a stunned Linguini. Remy was hastily hidden away when the restaurant's new owner Skinner sees a soup ladle in Linguini's hand and berates him for cooking. The soup is served to Linguini's dismay, but proved popular to a critic. Remy, pleased, was about to escape but was caught. Linguini was told to hastily dispose of him, trapped in a jar, and he cycled to the River Seine to dump him.

Linguini was about to drop Remy but desists, noticing that Remy could understand him talking. Linguini quickly figures out that he can not cook, while Remy can. Linguini releases him, and takes Remy into his apartment. There Remy learns a way to work with Linguini to cook while Remy can remain covertly hidden which is to use Linguini's hair to control Linguini like a puppet.

Remy helps Linguini recreate the soup to prove to Skinner that the success was not a fluke on Linguini's part but Remy's talents remain anonymous. When Skinner sees the soup he gives Linguini the cooking job but still is suspicious wondering where Linguini suddenly got his new talents. While seeing Linguini work he sometimes spots Remy with him but when he looks again Remy has vanished deeply confusing Skinner. Both Linguini and Remy are unaware that Skinner has been spying on Linguini and secretly taking some of Linguini's hairs for his lawyer to examine due to the fact that Linguini is Gusteau's son and the owner of the restaurant. This would challenge Skinner's hopes to continue his new frozen food line used in Gusteau's image.

When Remy learns this revelation, he steals the documents but in return is chased by Skinner. Remy climbs aboard a boat but Skinner refuses to lose and pursues Remy boat by boat ending with Skinner accidentally falling into the the canal when jumping between 2 boats; and seeing Remy run back to the restaurant with the documents. Later that day, Skinner loses the restaurant's business interests, and with it the restaurant and frozen food lines. Linguini takes control as the rightful owner and Skinner either is fired or resigns not wanting to work under Linguini. Linguini also provides Remy with a new wonderful posh apartment to live in with him.

One night, Remy unexpectedly reunites with his family who believed him to have died in the rapids of the sewers. Django asks Remy to stay, but Remy shows his loyalty to Linguini, having bonded with his new human friend while being absent from his rat colony.

However, Remy gets confused when he sees Linguini bonding with Colette, the only woman cook in the kitchen, and crediting his talents to her. Remy gets attention from Linguini and gives him a wake-up call reminding him of Remy' true part in the cooking. However, Linguini is unconvinced in it and throws Remy out. In retaliation Remy lets his family raid the kitchen one night but Linguini, wanting to reconcile accidentally discovers them and angrily throws them out.

Remy is so guilty that he again ditches the family to think over what to do now, at the apartment. The news then breaks out that one of Gusteau's mortal rivals; food critic Anton Ego who gave Gusteau's a scathing review in the past that eventually resulted in Gusteau's death; will come again to review the restaurant. The next evening, Remy tries to wait for the perfect moment to help Linguini or try to reconcile but is captured by Skinner who uses blackmail to order Remy to create a new successful frozen foods line. Emile sees what has happened and brings Django to help him free Remy from Skinner's limousine. Linguini realizes that he cannot work on the food without Remy and when Remy returns Linguini is so happy to see him again that he is forced to admit to the staff the truth. Feeling betrayed by Linguini's fraud, the staff walk out of the restaurant. Colette initially quits her job also but returns when remembering her idol Gusteau's motto: "Anyone Can Cook."

With help from Remy's colony, Linguini, Colette and Remy present to Anton Ego and a disguised Skinner a version of an ancient dish, ratatouille. Anton Ego loves it when realizing that his mother made it for him when younger and now a changed man, Ego asks for the chef to thank for the dish. When Skinner sees that Ego is impressed, he tastes it and when trying to find out who cooked it, he finds out that Remy's rat colony did it. Skinner is then locked in the room with a health inspector Skinner had previously summoned. Ego is told to wait until all customers have left, to see the chef. Hours later, they reveal Remy to Ego. At first Ego thinks they are joking but when they explain and demonstrate it, a stunned Ego thanks them, walks back home and writes a wonderful review. He does not mention that the cook was a rat, but calls him “nothing less than the finest chef in France.”

The next morning, Ego puts his review in the newspaper but because Skinner and the Health Inspector had to be freed, the Health Inspector and Skinner tattle to the health department about Gusteau's kitchen being filled with rats; thus successfully getting it closed down and defunct.

Although very disappointed to lose a very successful, legendary restaurant to Skinner and the Health department, Remy, Linguini and Colette take it well and to recover from their business collapsing, they buy out a new building and there they start a new restaurant modeled after Gusteau's called La Ratatouille to continue the Gusteau legacy. Anton Ego who was fired for supporting a restaurant filled with health violations, becomes an entrepreneur and helps Linguini and Colette fund the restaurant with Remy as the chef and owner, Linguini as the waiter, Colette as the sous-chef, and Anton Ego the sponsor and co-owner.

Your Friend the Rat

In the animated comedy short, Remy and Emile teach the viewers about the history of the rat in order to bring a better understanding between the two species.

Remy is a rat who simply adores food and its quality. He has a friend who is a spectral representation of the late Auguste Gusteau, Remy's hero. He is shown to have a very good sense of smell, which is probably due to his likeness to food, so Remy's father, Django, gave him a job as poison-checker. Due to his gift with food, he always thinks that whatever he think is always correct, which it always is, and always tries his best to make the food he makes high-standard. He also has an interest in humans, because of how they customize food in an exquisite way, and soon becomes quite close to one particular human, Alfredo Linguini, who affectionately calls him "Little Chef" and cannot cook.

He is not a typical rat, and his personality is mostly like one of a human, as he walks on two feet instead of four. What he thinks of his talent is a bit of modesty, as shown when Linguini asked him if he could actually cook. Towards the fact that he is not really a typical rat, this concerns his father excessively, and always ends up in argument with him to do with his ways.

His overall dream is to become a chef, and he is always tempted to cook wherever he finds what he needs. When he finds Linguini, and realizes he can control his actions with his hair, he immediately cooks food of extremely high-standard, hiding under Linguini's toque, and everyone buys his dishes by asking for the "Special Order."

At the end of Ratatouille, Remy's dream comes true in which he becomes a chef at the La Ratatouille bistro in Paris.

Escaping with the cookbook he carries 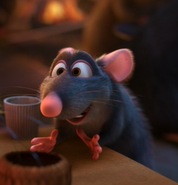 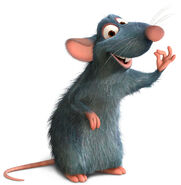 Remy on the Blu-ray + Digital HD Release of Ratatouille.