"Hey, no cameras! Get outta here!"
—Richard Clayton Kensington yelling at some paparazzi with cameras.

Richard Clayton Kensington is a character in Cars.

"Richard left his wealthy, pampered life in Derbyshire, England to make his way in the states as a security officer. You'd never know how reserved and proper he once was when you hear him barking orders and shoving zealous race fans out of the gate."[1]

In the film, Richard is seen among several other security officers at the Motor Speedway of the South, yelling at cars to back up while the race officials try to determine who won the race. 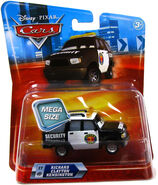 Retrieved from "https://pixar.fandom.com/wiki/Richard_Clayton_Kensington?oldid=211571"
Community content is available under CC-BY-SA unless otherwise noted.