Pixar Wiki
Register
Don't have an account?
Sign In
Advertisement
in: Characters, Inside Out Characters, Shorts Characters
English

Riley Elphaba Andersen[4] is a character in Inside Out and Riley's First Date?. She is an 11-year-old girl who turns 12 at the end of the film who loves hockey. Riley was uprooted from her happy and simple life in Minnesota and taken to San Francisco, where she experiences various changes in her life. Her mind is the film's main setting. The story is almost entirely told from the point of view of her five Emotions: Fear, Sadness, Joy, Disgust, and Anger.

Riley was born in Minneapolis, Minnesota. She grew up there as a cheerful young child, enjoying a life dominated and controlled by Joy. Her personality as represented by her Islands of Personality was composed of a love of hockey, a sense of honesty, family, and friendship, and a goofy side. Her best friend was Meg.

However, when Riley turns 11, everything changed. Her family left Minnesota as her father got a new job at San Francisco.

While she was initially excited by the trip, once they arrive at San Francisco, things become less enchanting. Riley's Joy tries to keep things positive, but Riley goes from disappointment to depression. She finds her new house decrepit both on the outside and the inside. Furthermore, the moving van has not yet arrived, and her father becomes distant and less caring for his family as he deals with the struggles of his new company. Even the food becomes disgusting as she encounters broccoli pizza. She starts feeling less joy, much more Disgust, Fear, and Anger, and starts to feel Sadness when recalling memories from Minnesota. Nevertheless, that evening her mother talks to her about her father's difficulties and asks her to be joyful to support him, something Riley wholeheartedly agrees to do.

The next day is Riley's first day at her new school. She feels mostly excited as Joy takes things in hand. However, as soon as class starts, she is called on by the teacher, one of the things she is the most afraid of. She begins introducing herself shyly, gaining some confidence after the teacher encourages her. However, in the middle of her presentation, the joyful memory she recalls suddenly fills her with sadness, and she starts crying in class. This moment marks her deeply and creates a new sad core memory. However, during the course of this incident she suddenly loses her Joy and Sadness, as well as all the core memories, the new one and those that powered her personality alike, leaving her completely confused.

That evening, her parents notice that Riley is more reclusive and moody than usual. Their attempts to understand what is happening annoy Riley who ends up in a fight with her father. As she goes to bed, angry, she rejects the goofball aspect of her personality.

The next day, Riley has a Skype-like conversation with her friend Meg. She is angered and jealous, at the news that Meg has made a new friend, taking it like she has been replaced so she ends her friendship with Meg for good, and rejects friendship as a result. For lunch at school, she does not know where to sit and ends up on an isolated bench where she starts thinking about loneliness. Following school, she is brought by her mother to the tryouts for the local hockey league. Absolutely not into it, she fails to play properly and falls. She leaves the rink angry and quits hockey.

That night, before going to sleep, her Anger makes her rebel against her situation. Her desire to go back home becomes so strong she begins to consider the idea of running away.

That same night, she wakes up out of fear after seeing her worst fear Jangles pop up in a dream. A dream that was unpleasant to start with.

The idea of running away now presents itself clearly to her mind and she takes it. To pay for a bus ticket, she steals her mother's credit card, thus rejecting the honesty aspect of her personality without any fanfare. She leaves her house, pretending to go to school. She turns off her phone after receiving a call from her mother, thus rejecting her sense of family. As she boards a bus to Minnesota, she becomes completely emotionless, disconnected from herself, having lost all her personality.

At this moment, Joy and Sadness come back. Sadness takes the idea of running away out of Riley. Riley suddenly comes back to her senses, gets off the bus and runs back home to find her parents very worried. Taken by a profound feeling of sadness, Riley bursts in tears and tells her parents that she misses Minnesota and everything she left there. Her confession brings her family together and her parents comfort her. This returns to her her sense of family stronger than ever.

Sometime later, Riley is now 12 and is seen adapting to her new life in San Francisco, having found new friends, a new hockey team, and a somewhat more layered attitude towards the world.

Riley returns in the short film, where she goes out skating with a boy named Jordan (whom she met at the end of the film). Meanwhile, her parents suspect that she is going out on a date with him and the Andersens' emotions all try to find a way to make it through this, with weird and comical results.

Her clothing choices vary through the film, but her typical outfit seems to be a yellow jacket over a random outfit. She is also seen wearing a multicolored stripped long-sleeved shirt when arriving in San Francisco. She also is seen wearing a red, yellow, and green zigzag shirt on her first day of school. Back home in Minnesota, she was seen wearing a pink t-shirt and jeans. She wears red sneakers through most of the film. Her sleeping clothes consist of a green short-sleeved shirt with an image of a cartoon koala on it and dark blue sweatpants. She owns a blue backpack. As her personality breaks down, she begins to wear darker colors, such as a black sweatshirt.

Riley in the Inside Out teaser trailer 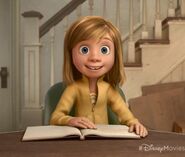 Riley as seen in the Disney Movies Anywhere sneak peek

Riley and her mom and dad eating from Chinese Food Boxes

Riley in the rain

Toddler Riley naked on a chair

Toddler Riley running around naked after a bath

Riley as she appears in Disney On Ice presents: Follow Your Heart