Rip Clutchgoneski is a character in Cars 2.

"The former European colony and newly independent Republic of New Rearendia is desperate to put their name on the map – the #10 open-wheeled racer Rip Clutchgoneski is their best bet. After putting together a remarkable string of qualifying races, Rip’s entry into the World Grand Prix is clearly the Cinderella story of the competition. Though Rip credits luck for his chance on the international stage, it’s really skill and exuberance that brought the proud New Rearendian racer to the starting line."

Rip Clutchgoneski participated in all three World Grand Prix races, as well as in the Radiator Springs Grand Prix. Because of his modest origin from an unknown country and of his lack of titles, Rip can be considered the rookie of the competition.

The first race, in Tokyo, was Rip's best performance. He started from fifth position from the back (the best racers started at the back of the line for this race). Although in the first part of the race he was seen near the end of the pack, he gained places after the dirt section. He finally got up to the third position, but then, had his motor blown out by the lemons and was forced to quit the race. In the following races he stayed near or in the last position. At Porto Corsa, he was one of the last racers to crash in the huge pileup, at the same time as Raoul ÇaRoule. He was then in ninth position. In the race of London, Rip Clutchgoneski was seen in last position. At Radiator Springs he was seen around the 4th or 7th positions.

Rip's design is reminiscent of Formula One-like production cars, like the Caparo T1. He resembles most the little-known New-Zealand super-car Hulme CanAm, of which he bears characteristic elements like its distinctive air dams, wheel covers and boat-shaped central body. Hulme's developers reportedly saw this in an unfavorable light and found Rip so similar to their car they considered making a legal action against Disney.[2] However, Rip does differ from the Hulme CanAm by several design elements (F1-like cockpit, different rear end, side vents), and some Caparo T1-derived elements can be spotted. Rip has the Hulme's characteristic orange color (although the Caparo too is frequently presented in orange), and furthermore, concept art reveals he was first designed with black wheel covers, matching the Hulme car.

With Raoul ÇaRoule at the Radiator Springs Grand Prix 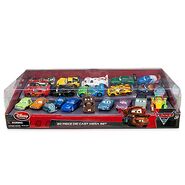 Português do Brasil
Community content is available under CC-BY-SA unless otherwise noted.