Robot is a red and blue educational robot toy that appeared in the Toy Story series. He is shown to be good friends with Snake, as they're always seen together. Robot is also known to be good with building blocks. He and Snake appear to be acquainted if not friends with Mr. Potato Head, Hamm, Rex, and Slinky, as they are usually seen sitting with them during meetings and sharing space to sleep on the bookshelf.

In Toy Story, Robot and Snake are called by Woody for podium duty for a staff meeting. Once Buzz Lightyear arrives in Andy's room, Robot, like most of Andy's toys, takes a liking to him. During the "Strange Things" sequence, when all the toys are working out, Robot stands on his head to let Buzz run on his treads like a treadmill. Robot also helps Buzz repair his ship. Also robot got upset at Woody when Mr. Potato Head accused him for "Killing" Buzz and was attacking Woody by pulling on his right arm. Later on he became friends again with Woody after rescuing Buzz.

Robot later appeared in Toy Story 2 when Buster comes into Andy's room, during the yard sale roll call, and watching the re-enactment of Woody's kidnapping after Woody was taken. Before Buzz and his team leave to save Woody, Robot and Rocky Gibraltar assist Wheezy, who pleas to Buzz to save Woody. Upon their return, he watches Wheezy sing You've Got a Friend in Me with the other toys.

Robot makes an appearance in the home videos that Mrs. Davis took of Andy when he was a kid. Back in the present, he is no longer with Andy's toys, and it's explained by Woody that he was sold at a yard sale.

Robot makes a few appearances in the Toy Story video game, reflecting his appearance in the film.

In the first level, "That Old Army Game," Robot is seen with Rocky next to the baby monitor, awaiting the reports from the Green Army Men on the contents of Andy's birthday presents.

In the next level, "Red Alert!," the toys must quickly return to their spots after Sergeant reports that Andy and his birthday guests are returning to the bedroom. With Woody's assistance, Robot must escape from a nightstand and return to his place in the toy chest before Andy's return.

Once Woody accidentally knocks Buzz out the window, the toys believe this to be out of jealousy. In the level "Revenge of the Toys," Robot is one of the many toys out to hurt Woody on his escape from Andy's room.

In the Game Boy version, Robot has an additional appearance in the next level, "Run Rex, Run!" While Woody tries to escape the hostile toys with Rex, Robot and other toys try to stand in their way. 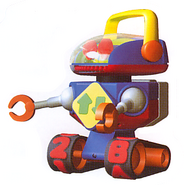 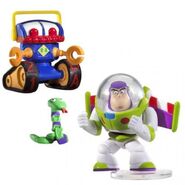 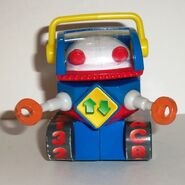 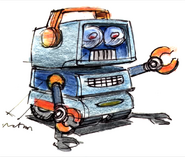 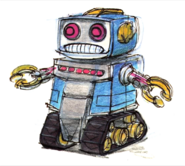 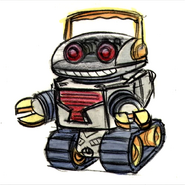 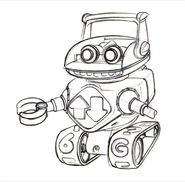 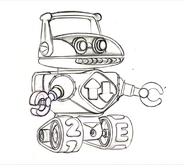 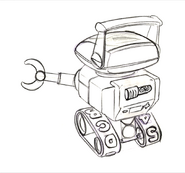