Rock-a-Stack is a toy by Fisher-Price for young children. It consists of five colored rings stacked onto a ring base.

It is first seen in Tin Toy as one of Billy's toys.

Andy has a Rock-a-Stack, seen under Molly's crib in Toy Story.

Seeming to have outgrown it, the now-forgotten Rock-a-Stack was seen on Andy's shelf, as seen in Toy Story 2, now missing two rings (one was pulled out of the toy box during the Green Army Men's search for Woody's hat). Seeing this, Mrs. Davis took this out to be sold at a yard sale.

A different Rock-a-Stack is seen in the the Caterpillar Room at Sunnyside Daycare in Toy Story 3. 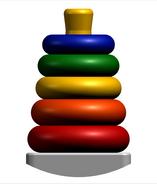