Toy Story
Rockmobile is one of the mutant toys in Toy Story. He is made using the head of a fly with the upper body of a Combat Carl action figure which is stuck in the headless torso of a Rocky Gibraltar toy controlling it with a car steering wheel. He can also drive the body around using the arms to walk on.

In Toy Story he's first seen on Sid's workbench, along with the Pump Boy, Legs, and Ducky, retrieving parts of Janie and Pterodactyl. Initially thought to be a cannibal, the mutant toys later turned out to be friendly after they fixed Buzz and repaired the Janie Doll and the Pterodactyl.

Rockmobile appears in the later part of the level "Battle of the Mutant Toys" in Toy Story: The Video Game. He, along with Legs and Babyface will attack Woody and Buzz on Sid's workbench. Using Buzz's karate chop action, they're able to escape. 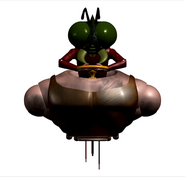 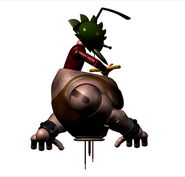 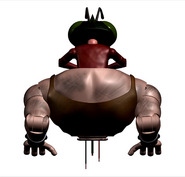 Add a photo to this gallery
Retrieved from "https://pixar.fandom.com/wiki/Rockmobile?oldid=209799"
Community content is available under CC-BY-SA unless otherwise noted.