thumb|right|300px Rod "Torque" Redline was a character in Cars 2. He's the American agent that Finn McMissile and Holley Shiftwell were supposed to meet until circumstances forced him to pass crucial information to Mater, whom the two British spies mistook for Redline wearing a "clever" disguise.

Rod “Torque” Redline was considered by many as the greatest American spy in the world. Recruited after the Cold War for both his brains and brawn, Torque was a tough-as-nails Detroit muscle car with a mastery of disguises. In his latest deep-cover operation, he obtained vital information about the plot to sabotage the World Grand Prix. So Rod planned a rendezvous with his British counterparts to share his discoveries at the World Grand Prix welcome reception in Tokyo, Japan. But with the bad guys hot on his tailpipe, Rod was forced to ditch the intel early and with the first party guest he sees — a rusty American tow truck named Mater.

He was first seen on the oil rig (at the beginning of the movie) disguised as a Gremlin. Rod later came to the Tokyo party to exchange info with Finn McMissile, but his plan was infiltrated when he was ambushed by Acer and Grem. When Mater comes across them, Rod passes the device with the info onto Mater's undercarriage when no one was looking.

After doing this, Rod was captured by Grem and Acer, who brought him to Professor Z in their secret lair, where they tied him down. He was then pumped with the fuel "Allinol", and Professor Z demonstrated, on the agent himself, what happens when cars fueled with Allinol are exposed to an electro-magnetic pulse. As a result, Rod was killed from a gargantuan spontaneous explosion.

After his engine was blown, you could slightly see his corpse in the reflection of the screen of him in the bathroom with Mater.

Rod re-appears in Cars 2: The Video Game as a downloadable character on the PS3 and Xbox 360 versions. He can also be downloaded in his Gremlin disguise.

Rod captured by the Lemons. 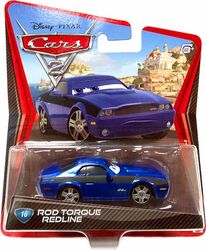 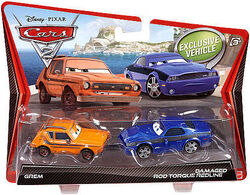 Retrieved from "https://pixar.fandom.com/wiki/Rod_Redline?oldid=122935"
Community content is available under CC-BY-SA unless otherwise noted.