Cars 2
Rod "Torque" Redline is a character in Cars 2. He's the American agent that Finn McMissile and Holley Shiftwell were supposed to meet until circumstances forced him to pass crucial information to Mater, whom the two British spies mistook for Redline wearing a "clever" disguise.

Rod "Torque" Redline is considered by many as the greatest American spy in the world. Recruited after the Cold War for both his brains and brawn, Torque is a tough-as-nails Detroit muscle car with a mastery of disguises. In his latest deep-cover operation, he obtained vital information about the plot to sabotage the World Grand Prix. So Rod plans a rendezvous with his British counterparts to share his discoveries at the World Grand Prix welcome reception in Tokyo, Japan. But with the bad guys hot on his tailpipe, Rod, after getting beaten up by the lemons, is forced to ditch the intel early and with the first party guest he sees — a rusty American tow truck named Mater.

He was first seen on the oil rig (at the beginning of the movie) disguised as a Gremlin. Rod later came to the Tokyo party to exchange info with Finn McMissile, but his plan was infiltrated, and he was ambushed by Acer and Grem, who damage him heavily. When Mater comes across them, Rod passes the device with the info onto Mater's undercarriage when no one was looking. Mater noticed the condition Rod was in, and when he asked if he was okay, Rod simply replied that he was fine.

After doing this, Rod was captured by Grem and Acer, who brought him to Professor Z in their secret lair, where he was restrained with three Denver boots. He was then pumped with the fuel "Allinol", which he claimed was good for cars. However, Professor Z demonstrated, on the agent himself, what happens when cars fueled with Allinol are exposed to an electromagnetic pulse generator disguised as a camera. As Allinol began to react, the lemons demanded to know who Rod passed the intel to, putting up a slideshow of all the cars he made contact with. Rod resists, but he has an involuntary reaction at an image of Mater, which Professor Z catches. Rod could only show horror at allowing an oblivious civilian tow truck to become a target, before he was killed from the spontaneous explosion of Allinol.

After his engine was blown, his corpse is visible slightly among flames in the reflection of the screen.

In Cars 2: The Video Game, Rod is a playable character that can only be used in the Xbox 360 and PlayStation 3 versions of the game, as he needs to be purchased from one of the corresponding stores, costing $1.00 USD for XBOX Marketplace and PlayStation Store. He is a heavy weight, and utilizes more power than speed. He can also be downloaded in his Gremlin disguise.

Rod's interrogation scene has been criticized as surprising or even inappropriate. In an interview, John Lasseter said that the scene was necessary to explain efficiently and visually the working and high danger of Professor Z's camera.[2]

It also enabled to get in the movie a certain tone of the spy genre. Story Supervisor Nathan Stanton said that while "watching spy films, where your character is basically tortured and it can be a really horrifying scene, I remember thinking if we could just get five-percent of this in one of our scenes, [...] if we could just get a little of this in what we want, it would be great. It would go a long way."[3]

Both Lasseter and Supervising Animator Dave Mullins mentioned that the scene as it had originally been conceived was much more dark and cruel, and that several people at the studio reacted to it.[4] They say in consequence that they "backed off tremendously." Lasseter mentions that the changes included making Rod a "tough guy".[2] 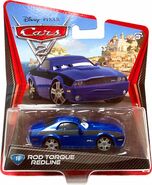 Retrieved from "https://pixar.fandom.com/wiki/Rod_Redline?oldid=151167"
Community content is available under CC-BY-SA unless otherwise noted.