"Roz, my tender, oozing blossom you're looking fabulous today. Is that a new haircut? Come on, tell me. It's a new haircut, isn't it? That's got to be a new haircut. New make-up? You've had a lift. You've had a tuck. You've had something. Something has been inserted in your skin that makes you look like..."
—Mike's comments on Roz

Roz is a character in Monsters, Inc. and  Monsters University. She is a large yellow slug-like monster with a tuft of white and gray, pointed hair on the top of her head. She wears a maroon sweater and black horn-rimmed glasses with supporting chains.

Roz is a supporting character in the movie. She appears to be the key master and administrator for Scare Floor F, holding all the keys to children's closet doors at Monsters, Inc. She is responsible for receiving all of the paperwork done by Mike Wazowski, and she often works in an office near Scare Floor F which can be separated from the rest of the factory via a retractable shutter. Roz slams the shutter shut on Mike's fingers at one point, injuring them.

Near the end of the film, it turns out that Roz is Agent #001 of the CDA. She reveals that she was working undercover for two and a half years at Monsters Inc. and that Mike and Sulley nearly blew it all when Boo came into their care. However, she does give credit for them exposing Henry J. Waternoose as the scandal she was trying to bust. She gives Mike and Sulley five minutes to return Boo back to her room before anything more happens to her. After Boo's door is shredded, Roz says that Boo's invasion never happened and that she doesn't want to see any paperwork about it, contrary to her demands earlier in the film. During this phase, Roz wears a yellow version of her iconic red sweater, with "CDA" printed on the right side and "001" printed on the left side.

She is not seen again for the rest of the film, but frequently appears in the outtakes. One example is when she unexpectedly pops out of a bathroom stall and startles Sulley, who has opened the bathroom door to get Boo. Another is when her fellow CDA agents surprisingly find her taking place of George Sanderson, after he gets his fur shaved off and is showered with disinfectant. The third is when Sulley tries to show Boo that the closet is empty, only to find it occupied by Roz saying "Guess who!" In all three outtakes, Roz makes her infamous laugh, "Ahh-haa-haa!" and sends others bursting into laughter.

Roz makes a quick cameo in Monsters University when Mike and Sulley are able to escape from the human camp and are taken by her CDA lackeys. She is shown wearing her own customized CDA bodysuit, with the eye lenses and air grille specially made in the shape of her horn-rimmed glasses and constant scowl and a transparent glass(or plastic)dome revealing her hair. Although Roz`s uniform covers her entire body, including the face, her size, shape, hairdo, and voice all give away her identity.

When Terri asks what's going to happen to Mike and Sulley, Roz states that Dean Hardscrabble will decide that. But to rest assured, she then adds that she will be watching them, "Always watching," foreshadowing M.I.

Roz is constantly petulant and blasé, and she is always seen frowning in almost every one of her appearances. She is especially stern to Mike, who she is constantly irritated by due to his incompetence; to the point where she slams a metal door onto his fingers with little warning. Roz's administrative role makes her constantly discuss paperwork with her coworkers, especially Mike who frequently forgets to file his paperwork. However, she does have a soft side, as she lets Sulley say goodbye to Boo before her door is shredded.

In the outtakes, she is shown to have a joking and playful side, as she interrupts various scenes by surprising her fellow 'actors'. These outtakes are the only times when Roz is genuinely smiling and laughing.

Mr Ray: "Welcome aboard, explorers! Mr. Ray here, your science teacher for the day. Let's get this show started! I want all optical orbits up front, and remember, we keep our supraesophageal ganglion to ourselves. That means you, Jimmy!"
Roz: "And hello, it's me, Roz. You monsters make sure that your tentacles and horns are not blocking anyone's view. And no food or drinks in the exhibit. Let's get started."
—Mr. Ray and Roz at the beginning of The Science Behind Pixar introductory video.

"This theater is now closed. Exit to the left to get to the exhibit. I'll miss each and every one of you. See, I'm crying, boo-hoo."
—Roz at the end of The Science Behind Pixar introductory video. 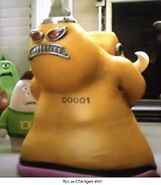 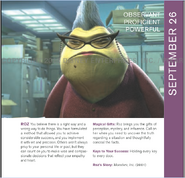 "The face that launched a thousand lunches." 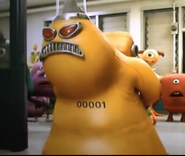 Add a photo to this gallery
Retrieved from "https://pixar.fandom.com/wiki/Roz?oldid=201125"
Community content is available under CC-BY-SA unless otherwise noted.