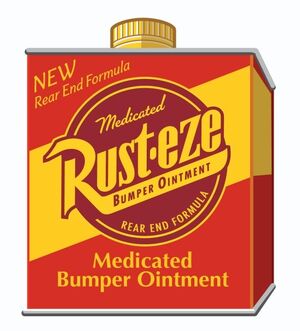 Rust-eze Medicated Bumper Ointment is a bumper ointment company who sponsored Lightning McQueen in Cars. McQueen at first looks down upon the vehicles who run Rust-eze and is planning to ditch them and go with Dinoco as soon as he gets a chance, but has a change of heart after his life-changing experiences in the town of Radiator Springs, and decides to stay with the company. The product was created by brothers Dusty and Rusty Rust-eze and is somewhat a "rip-off" as the commercial states: "Actual results may take up to 36 weeks", which is about nine months.

By the time of the events of Cars 3, McQueen has remained sponsored by Rust-eze. After McQueen's fateful crash puts him out for the rest of the season, Dusty and Rusty Rust-eze decide to sell Rust-eze, in hopes that a new owner would be more attuned with the modern world and could offer more for McQueen. The company is bought by the businessman Sterling. Under his direction Rust-eze expands its operations to open the Rust-eze Racing Center, a high-tech facility to train the racers of tomorrow. Seeing McQueen's apparent failure as a racer, Sterling also intends to merchandise McQueen's brand to the maximum with a line of McQueen-sponsored products. Eventually, following the game-changing victory of McQueen and Cruz Ramirez at the Florida 500, Rust-eze enters a partnership with Dinoco and is bought by Tex Dinoco.

In the Cars Die-Cast Line, there is a Lightning McQueen released with a can of Rust-Eze. On the back of it, there is a pledge as follows:

"Get speedy, soothing, wonderful relief from the pain and discomfort of rust. Fast-acting Rust-eze contains up to 2 1/2 more Eze for quick soothing relief. We promise."
—Clink and Clank

Retrieved from "https://pixar.fandom.com/wiki/Rust-eze_Medicated_Bumper_Ointment?oldid=179115"
Community content is available under CC-BY-SA unless otherwise noted.