Rusty Rust-eze is a character in Cars.

"Rusty and his brother Dusty created a small empire out of their mother's garage in Boston. It's been over 15 years and their mother has watched their operation grow into a household name with factories all over the country. Rusty and Dusty's mother says she couldn't be more proud of her two boy's accomplishments, but hopes that their next big move will be to finally move out of her garage."[1]

Rusty returned in Cars 3 alongside his brother Dusty, though like the original, they play minor roles.[2] 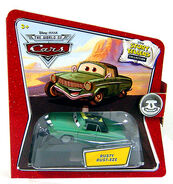 Rusty's die-cast
Add a photo to this gallery

Retrieved from "https://pixar.fandom.com/wiki/Rusty_Rust-eze?oldid=206720"
Community content is available under CC-BY-SA unless otherwise noted.