Cars 3
Ryan "Inside" Laney is a character in Cars 3. He is be voiced by and based on Ryan Blaney. He sports the racing number 21 (the same as Blaney) and is sponsored by Blinkr.[1] Blaney is a "third-generation racer", "known for his racing passion and ability to have fun on the track", who "races with talent, speed and precision".[2]

Ryan is one of the six next-generation racers, along with Harvey Rodcap, Tim Treadless, Ed Truncan, Aaron Clocker, and H.J. Hollis, to make their debut at the Motor Speedway of the South race, following Speedy Comet being fired. Sometime before the Florida 500, when being told in an interview that Lightning McQueen has not shown up yet, he compares this to the events from the first film when he did not show up at the tie-breaker race, something he heard from his grandfather. 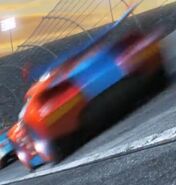 Ryan Laney next to Cruz Ramirez.

Die-Cast
Add a photo to this gallery

Retrieved from "https://pixar.fandom.com/wiki/Ryan_%22Inside%22_Laney?oldid=193592"
Community content is available under CC-BY-SA unless otherwise noted.