The SECUR-T units are steward-bots aboard the Axiom in WALL•E. Their name is an obvious play on the word "Security".

They are constantly chasing WALL•E and EVE after WALL•E accidentally frees the rejected robots. The steward bots see WALL•E, EVE and the defective robots as 'rogue robots'. When WALL•E, EVE and the liberated robots try to bring the positive example of the plant to the Holo-Detector, AUTO sends several Stewards to destroy them and the plant. However, EVE and the freed robots help WALL•E by destroying all of them (with HAN-S wrecking the most). During the credits, a Steward unit is all fixed and repair, later seen helping humanity restore Earth with a PR-T and WALL•A. 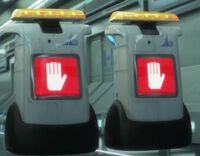 Two Stewards on patrol in the Lido Deck.

HAN-S bird-eye view before it attacks the Stewards.

A Steward stops scanning as he notices a sticky yellow painted path in front of him.

A Steward follows his directive of keeping everything in order...despite John's wishes.
Español
Community content is available under CC-BY-SA unless otherwise noted.
Advertisement