Pixar Wiki
Register
Don't have an account?
Sign In
Advertisement
in: Pages using duplicate arguments in template calls, Characters, Inside Out Characters
English

"Crying helps me slow down and obsess over the weight of life's problems."
—Sadness

Sadness is the deuteragonist of Inside Out. She is the blue Emotion and one of the five Emotions inside the mind of Riley, along with Joy, Fear, Anger, and Disgust.

According to an interview with Phyllis Smith, Sadness is the voice of reason: when Joy has an idea, she'll try and drag her down. She appears to be depressive most of the time, but there are a few instances where she is seen smiling.

"None of the other Emotions really understand what Sadness’ role is. Sadness would love to be more optimistic and helpful in keeping Riley happy, but she finds it so hard to be positive. Sometimes it seems like the best thing to do is just lie on the floor and have a good cry."[1]

Sadness was the second Emotion to take hold in Riley's mind, appearing 33 seconds after Joy. Afterwards, she tended to be more on the wayside than the other Emotions, both because Joy does not see any use to her and because she is not very confident herself. She often ends up reading mind manuals, a practice in which she is encouraged by Joy. On the upside, her readings confer her a superior knowledge of the mind world outside Headquarters.

When Riley's family moves to San Francisco, Sadness suddenly gains the ability to change a memory's emotion sad, leading Joy to instruct her to not touch any memories. On Riley's first day at her new school, Sadness is given by Joy the "fun" task of staying inside a circle drawn on the ground. However, when Riley presents herself to the class, Sadness gets out of the circle and turns the memory being recalled sad. When the other Emotions join forces to remove the memory, Sadness takes this opportunity to jump to the console. Her doings create a new, sad core memory. When a horrified Joy tries to dispose of the core memory, Sadness finally stands up to her due to Joy's actions being against regulations. The ensuing confusion results in Joy and Sadness along with all the core memories being vacuumed out of Headquarters.

The two Emotions find themselves lost in the vastness of the mind world, and Sadness is alarmed that the core memories and Joy are no longer in Headquarters. With Sadness too discouraged to walk, Joy ends up dragging her around, as Sadness' knowledge from the mind manuals proves useful to navigate the maze-like Long Term Memory. They seem to be making little progress until they stumble upon Bing Bong, Riley's old imaginary friend, who agrees to help them and proposes that they take the Train of Thought. To reach it, Bing Bong leads them to what he thinks is a shortcut. Sadness, who knows it is in fact Abstract Thought, a dangerous place, tries to convince Joy to go around it, but in vain. Her fears are justified when Abstract Thought activates and they are still inside. Nevertheless Sadness finds a way for them to get out. Their journey continues to Imagination Land, where Bing Bong is devastated to witness his rocket wagon being thrown in the Memory Dump. Sadness gets him to express his sadness and comforts him, much to the confusion of Joy.

The trio reaches the Train of Thought, only to find out it doesn't run during night. Joy and Sadness, despite initially disagreeing on the way to do it, end up working together as a team to go through Dream Productions and Subconscious to wake up Riley. However, the train is lost in the destruction of Honesty Island. Another way presents itself when Family Island's destruction exposes a recall tube large enough for Joy and Sadness to get to Headquarters. However, Joy realizes that Sadness cannot get in without touching the core memories and making them sad. After one hesitation, Joy declares that Riley needs to be happy, and locks the tube on herself, leaving Sadness behind. However, the tube breaks, and Sadness can only watch as Joy falls into the Memory Dump.

Now left on her own, a completely despaired Sadness concludes that she can only harm Riley and that she must go away. When she sees Joy coming back for her, she flees. She hitches a ride on a cloud and flies away. Joy manages to catch her anyways and bring them both back to Headquarters.

To the other Emotions' surprise, upon their arrival Joy asks Sadness to take care of Riley, who is taken by the idea of running away. Taking the situation in charge, Sadness takes out the idea bulb, bringing Riley back to her senses. Joy then hands to Sadness the core memories, which all turn sad. Sadness leads Riley to admit to her parents that she misses Minnesota, bringing them to comfort her. Joy, as means to compensate for her earlier treatment of Sadness, hands her the sad core memory she had created earlier. Sadness, however, decides to not use it, and instead brings Joy to the console. Together, they create a new core memory that is both happy and sad.

Sometime later, as Riley turns 12, Sadness is finally accepted as equal among the other Emotions, and stands now by the side of Joy at the console.

Sadness and Joy are polar opposites. While Joy is outgoing and ferociously optimistic, Sadness is slow and more prone to lie on the ground. Though joyful events can get her to smile (such as when Riley scores her first goal), she is usually pessimistic and consistently sees the negative side of things.

Like the other emotions, she trusts Joy to know what's right for Riley. She finds herself unhelpful in comparison, and is desperate that she can't get herself to see things from the same angle as Joy. She is insecure, and lives with the idea that her actions are bad and that she may be harmful for Riley.

But the fact is, Sadness is intelligent and in her slowness she is more thoughtful. She has deep empathy and compassion for others and their troubles, and can bring people in need together. She has a good instinct of what Riley needs when her life begins to change. However, she lacks the confidence to claim she has the right idea. Instead, she tries to repress her actions, which only leads her into expressing them uncontrolled. Over the course of the film, Joy comes to recognize the value of Sadness. The latter in turn comes to gain some self-esteem and to finally take her place at the console.

Sadness has light blue skin, navy blue hair, and sapphire blue eyes. She wears has a white turtleneck sweater, big round dark purple glasses, and navy blue pants and slippers. She has a faint blue glow, though it is usually outshined by Joy's brighter light. 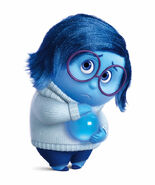 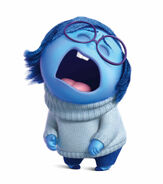 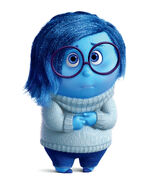 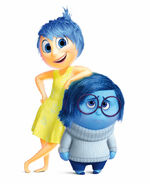 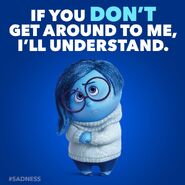 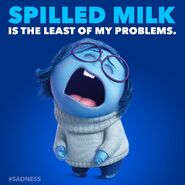 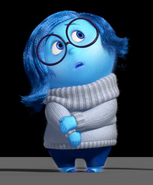 The first Character design of sadness 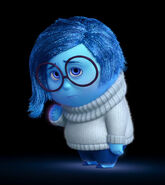 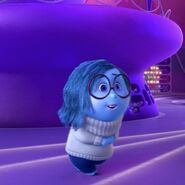 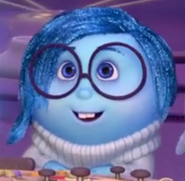 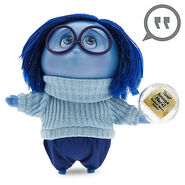 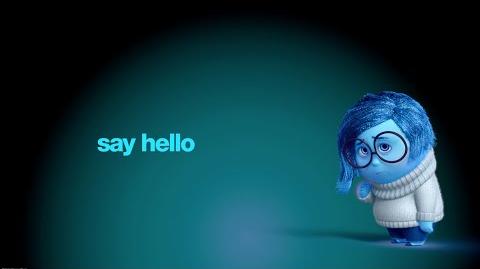 Meet Sadness - Inside Out 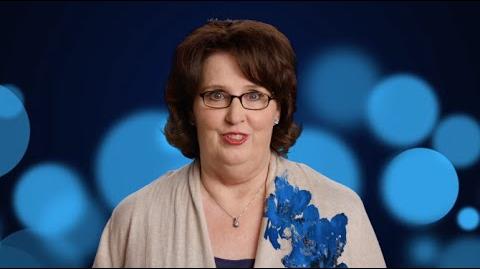 Meet Phyllis Smith as Sadness in INSIDE OUT