Cars 2
Sal Machiani is a minor character in Cars 2.

"Sal is about as gentle and old-world as they come. A busy little bee, he scoots around, up the steep hills of the Tuscan town of Carsoli, Italy, with his sweet-smelling exhaust trailing behind. More than making up for his small size by being an ape-of-all-trades, Sal can be found hard at work on any given day. But most evenings he's at the local cafe, shipping regional olio with his amici, and bidding passing microcars, "Buona sera.""[1]

Sal makes a extremely brief cameo in Cars 2, during the shot where Finn McMissile is driving through Porto Corsa as he attempts to sabotage Grem and Acer's plan. When Finn jumps over a road, Sal is seen in the background.

Sal can be seen in the background 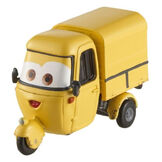 Die-cast
Add a photo to this gallery

Retrieved from "https://pixar.fandom.com/wiki/Sal_Machiani?oldid=130981"
Community content is available under CC-BY-SA unless otherwise noted.