Sarge: "Will you turn that disrespectful junk off?!"
Fillmore: "Respect the classics, man! It's Hendrix!"
—Sarge and Fillmore 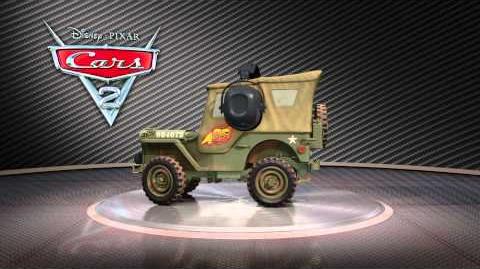 "Ask Sarge about his military service and he'll regale you with stories of daring fearlessness! Like the time his tank friend lost his track in The Battle of the Bulge and Sarge had to tow him to safety. For his bravery, Sarge received the Grille Badge of True Mettle! It's displayed front and center at Sarge's Surplus Hut, side by side with Sarge's own brand of The Mother Road survival kit. He guarantees that if you break down, this kit will help you get through the night and maybe the next world war, and it all stows nicely in your trunk."[1]

Sarge is a 1941 Willys military Jeep. He proudly served in World War 2 and received the Grille Badge of True Mettle for towing a tank to safety in the Battle of the Bulge. He now lives in Radiator Springs and runs Sarge's Surplus hut, where he sells military surplus and his own Mother Road Survival Kit, guaranteed to get you through the next world war should you break down. He believes firmly in order and has his lawn perfectly manicured and mowed twice a day. Every morning he plays a rousing rendition of Reveille and raises the American flag, only to be interrupted by his neighbor Fillmore who simultaneously plays Hendrix's rendition of the Star Spangled Banner. Despite their constant bickering, Sarge and Fillmore appear to be close friends.

Sarge is a patriotic veteran who runs the Radiator Springs Army surplus store, Sarge’s Surplus Hut. Sarge’s no-nonsense attitude often leads to bickering with his hippie friend, neighbor and polar opposite, Fillmore. Despite their differences, the two are almost inseparable – even throughout their world travels. A security specialist with military connections around the globe, Sarge joins Lightning McQueen and Mater at the World Grand Prix as a member of Team Lightning McQueen.

In the film he is seen with Fillmore for most of the time. In Italy he is amazed at a drink he has which Fillmore says is organic. He also summons the army while Sheriff does the same with Scotland Yard to fight and catch the lemons. At the end Fillmore says that Sarge replaced Lightning's fuel. He also finally says "man."

Sarge appeared on the picture with Mayday in the fire station of Propwash Junction. 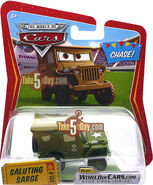 Retrieved from "https://pixar.fandom.com/wiki/Sarge_(Cars)?oldid=206585"
Community content is available under CC-BY-SA unless otherwise noted.