"A good soldier never leaves a man behind."
—Sarge's policy

Sergeant (or simply Sarge), is a character in the Toy Story series. He is the gung-ho commander of the Green Army Men, Andy's miniature plastic soldiers.

He is loyal to Woody, and under his orders, sends his troops on different missions, most commonly reconnaissance. Sarge is made holding a pistol and binoculars, which he uses when scouting out an area for humans, or getting a closer look at presents. Sarge, voiced by the late R. Lee Ermey, is based upon his character of Gunnery Sergeant Hartman from Full Metal Jacket.

Sarge is first seen in Toy Story when Woody asks him if he’s seen Slinky, to which he replies he hasn't.

After Woody's announcement of Andy's birthday startles the toys, Woody instructs Sarge to take his troops to report what Andy's presents are. Sarge alerts his soldiers that this is a Recon Plan Charlie, in which the soldiers communicate what Andy receives through a baby monitor. After sending out two paratroopers to scout the area, Sarge leads a group of men down via a jump rope, however, they are forced to freeze after Andy's mom walks in, injuring a minesweeper. Despite his demands, Sarge carries the injured soldier back to a plant, where Sarge reports back to Andy's room through the baby monitor. Sarge successfully reports all of Andy's presents back to Andy's room, however, right after he tells the soldiers to pack up, he sees Andy's mom bring out a surprise present from the closet, and instructs them to turn it back on. Due to feedback back in Andy's room, Rex gets anxious and accidentally knocks the baby monitor off the nightstand, making its batteries to fall out. After Woody puts the batteries back in, all they can hear is Sarge’s warning that Andy is coming upstairs, forcing the toys to scramble back to their places. The surprise present from Andy's mom that Sarge has been unable to identify turns out to be a Buzz Lightyear action figure.

The Bucket O' Soldiers, which Sarge and his troops are stored in is now packed up near Andy’s desk for the move. After Woody accidentally knocks Buzz out the window, Sarge, believing that Woody has done this intentionally, harangues him until Woody cuts him off by closing the lid on the bucket. Once the toys begin to get hostile towards Woody, the Bucket O' Soldiers bursts open, and Sarge instructs his men to swarm Woody, which encourages the other toys to attack Woody as well. Before anything is done, however, the toys retreat due to Andy approaching.

At the end of the movie, Sarge is proud to work under Woody again for Woody's deeds in helping save Buzz. He is seen leading his troops through another Recon Plan Charlie for Christmas presents (they are hiding in the Christmas tree). He is able to identify Molly's first present as Mrs. Potato Head, but is unable to find out Andy's first present until the toys hear Andy's excited voice saying, "Wow! A puppy!"

In Toy Story 2, Sarge oversees his men searching the toy box for Woody’s missing hat. After Slinky eventually finds it, Sarge orders the Green Army Men, along with Rocky Gibraltar to guard the door from Buster, who eventually overpowers them. Once Andy returns to his room, he has time to play with his toys for a little bit before he leaves for Cowboy Camp. In this scenario, the soldiers are minions of the Evil Dr. Porkchop, who sits perched on the Bucket O Soldiers. He, who has kidnapped Bo Peep forces Woody to choose whether she shall die by Barrel of Monkeys, or Shark. Woody calls upon the help of Buzz Lightyear, who bursts onto the scene riding RC. This knocks the Evil Dr. Porkchop off the Bucket O' Soldiers that he’s on, and knocks over the soldiers.

Once the yard sale is announced, Sarge assists Buzz in gathering the toys together for an emergency roll call.

At the end, Sarge and his men are some of the toys watching Wheezy's performance of "You've Got a Friend in Me."

In Toy Story 3, Sarge and the rest of the Green Army Men are seen being played with by a young Andy in flashbacks. Now that Andy is almost 18-years old, Sarge is only one of three remaining Green Army Men in Andy's room (the others are the two paratroopers). First, they assist the remainder of Andy's toys in trying to get them noticed by Andy in Operation Playtime. They bring a phone into the toy chest, while dialing his number on another phone so that Andy has to notice them. The plan fails, as Andy retrieves the phone, but ignores his old toys (he blames the incident on Molly). After it's announced that Andy's preparing to go to college, the Green Army Men plan to leave Andy’s home for good. About to parachute from Andy’s windowsill, they explain that when Andy cleans his room, he and they will get to go. Woody tries to reassure them, but they jump out of the window anyways, with Sarge be grabbed to fly by one of the paratroopers.

At the end of the movie, the troops finally land in the playground at Sunnyside Daycare, where they are greeted by Barbie and Ken, now leaders of Sunnyside, who invite them to join the party. It is likely that Sarge and the two paratroopers have settled in the daycare under Barbie and Ken's leadership. That night, they stand on the ceiling lights in the Butterfly Room from which they lower a disco ball for Bookworm to illuminate with his flashlight so the Sunnyside toys can enjoy a disco party that is held in the room.

—Woody asks Sarge if he has seen Slinky

"Mission accomplished. Well done, men. Pack it up. We're goin' home."
—Sarge telling the soldiers to go back to Andy's room
"Wait! Turn that thing back on!"
—Sarge, as he notices Andy's mother holding a surprise present
Sarge: "Red alert! Red alert! Andy is coming upstairs! Juvenile intrusion! Repeat, resume your positions now!"
Woody: "Andy's coming! Everybody, back to your places! Hurry!
—Sarge alerts the toys that Andy (and his friends) are coming to his room

"Where is your honor, dirt bag? You are an absolute disgrace! You don't deserve to... Hey!"
—Sarge flips on Woody, who has accidentally knocked Buzz out of the window
Sarge: "There he is, men! Frag him!"
Green Army Men: "CHARGE!!"
—Sarge orders his soldiers to "frag" Woody

Sarge: "We've done our duty. Andy's grown up."
Paratrooper #1: "And Let's face it. When the trash bags come out, we army guys are the first to go."
Buzz: "Trash bags?"
Woody: "Who said anything about trash bags?"
Sarge: "It has been an honor serving with you. Good luck, folks."
Paratrooper #2: "You're gonna need it."
—Sarge and his two last paratroopers leaving in Toy Story 3 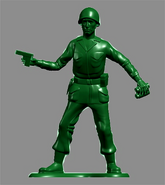