Scud is Sid Phillips's manic bull terrier in Toy Story. He loved to help his owner torture any toy for fun by chewing them. He also likes dog toys better than other toys.

Scud was very aggressive and loved to help his owner torture toys for fun by chewing them to tear up, as well he likes dog toys better than other toys. He was first seen with Sid, who blew up a Combat Carl. Later, when Sid returned home from Pizza Planet with Woody, Buzz Lightyear, and an Alien in his backpack, Scud lunged into Sid's backpack for a toy to chew on, Sid tossed him the alien, and orders him to chew up violently.

Later, when Woody tried to escape from Sid's house, he encountered Scud, who was sleeping halfway down the stairs, forcing Woody to retreat. Unfortunately, his pull-string ring got caught in one of the curls of the railing as he crept down the upper-level hallway. The ring then snapped off from the railing, triggering Woody's sampled voice, and Scud woke up and charged toward Woody and Buzz (who told Woody to split up). Woody hid in a closet while Buzz hid in another room. Scud snuck into the room where Buzz is but retreated when he spotted Sid's father sleeping on a La-Z-Boy before Buzz sees the TV commercial for Buzz Lightyear toys and finally discovers that he is a toy.

Later, when Sid took Buzz out of his room, Woody attempted to give chase. He was able to catch the door before it closed, but as he opened the door again, he was confronted by Scud standing on the far side of the hallway. Catching sight of Woody, the vicious dog charged toward him, prompting Woody to dart back into Sid's room and hold the door shut to prevent Scud's entry. While Scud was positioned outside the door ready to attack any toy that exited Sid's room, the mutant toys helped Woody realize the plan to save Buzz from Sid's clutches. The toys tricked Scud into running clear out of the house by sending out the Frog to distract the dog. While chasing after the Frog, Scud knocked down Sid's sister Hannah--who had just answered the door (only to find nobody out in the front porch)--as he jumped onto the empty front porch. He was then subsequently locked out by Hannah, who was annoyed by his stupidity.

When Woody and Buzz, after leaving Sid's house, ran after the moving truck to catch up with Andy and his toys, Scud eyed them and gave chase to bring them back to Sid's house. While Buzz had already made it onto the van, Woody was still trying to climb up a hanging strap; it was during this when Scud caught up with him and attempted to pull him down. Buzz fought Scud off, allowing Woody to climb aboard the moving van, but leaving Buzz behind. Woody dug the RC Car out of storage and used him to try to drive Buzz back before the other toys still believe that Woody is up to no good. Scud refused to give up and chased Buzz into an intersection with oncoming traffic. At the same time, Woody tried to prove his innocence to the other toys, who ambushed him while controlling RC, forcing him to do spins and spontaneously jump. Unfortunately for Scud, as he entered the intersection, he triggered an accident in which five cars crashed into each other, forming a circle that trapped Scud. Buzz was able to escape on RC while Scud was left behind, desperately trying to find a way out to get Woody and Buzz.

It is unknown what happened to Scud after the movie, though it was possible he was found by his owners when they learned of the accident.

Scud is angry when he sees Woody and Buzz running away for Moving Truck. 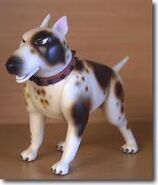 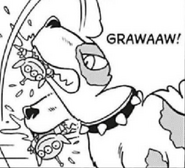 Scud in Toy Story Manga Comic, Angrily Violently chewing Toy Alien from Pizza Planet which it wasn't a real dog toy for him.

Scud as he appears in Toy Story The Game 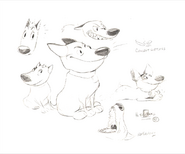 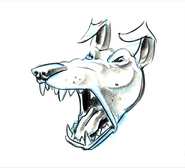 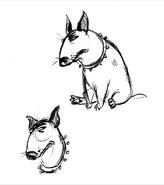 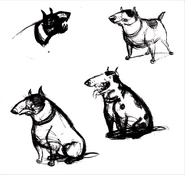 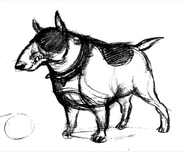