Unknown (original voice used in toy)
See 'n Say is a series of real-life educational toy for toddlers made by Mattel. In Toy Story, Andy owns a 1989 "The Farmer Says" model. See 'n Say is one of Andy's many toys. It is a recurring character. See 'n Say seems to get along well with Mr. Spell, appearing in many scenes alongside it. Its featured animals are (clockwise) sheep, dog, duck, frog, horse, coyote, rooster, pig, cow, bird, cat and turkey. See 'n Say lives inside Andy's closet. Though not having proper legs, it gets around by hobbling on its stand. When See 'n Say is shocked, excited or frightened, its center arrow wheel spins.

In Toy Story, See 'n Say appears at the staff meeting before Andy's birthday party in shock that his party was moved to that day, even though Andy's birthday was not until the following week. Woody explained to all the toys that Andy's mother wanted to have the party before they move to their new house.

When Hamm alerts the toys that the birthday guests have arrived, See 'n Say, along with basically every other toy, except Woody, run to the window to see what kind of sized presents his friends are bringing, in fear that Andy may get bigger toys and that they will all be given away. See 'n Say and all the other toys also appear in the overhead aerial shot of Andy's bedroom, running and scrambling back to their original places and positions before Andy and his friends enter the room. It comes out of the closet with the other toys after Andy and his friends leave the room and appears behind everyone before Woody climbs up onto the bed to greet Buzz Lightyear.

Much like everyone else, See 'n Say took an immediate liking towards Buzz when he first arrived, appearing alongside him on many occasions after watching him fly.

During the middle of the film, See 'n Say was not seen, assumingly packed away in the moving boxes. Once Woody reached the moving van to find RC and to save Buzz, he mistakenly opens a box contained Andy's other toys, including See 'n Say. While Woody attempts to save Buzz with RC, the toys attack, thinking that Woody was trying to get rid of RC by kicking him out of the moving van like they assumed he did to Buzz. They succeed in throwing him off the moving van, however, is overcome with guilt once it's become apparent that Woody was telling the truth, as the rest of the toys strive for a way to save them.

See 'n Say appears again at the end of the film in Andy's bedroom engaging in the Christmas festivities with the rest of Andy's toys, appearing alongside Mr. Spell and Mr. Mike before hearing what presents Andy receives for Christmas from the Green Army Men.

See 'n Say appears in a cameo in Toy Story 2, when it attends the staff meeting. It is later seen listening to Wheezy's song "You've Got a Friend in Me".

See 'n Say does not appear in Toy Story 3, most likely being donated, sold, or thrown away. However, another See 'n Say appears. It was used by Lotso's Gang as a roulette wheel for their gambling inside a vending machine. This is also a "The Farmer Says" version, although it's an earlier model from the 1970s-1980s. 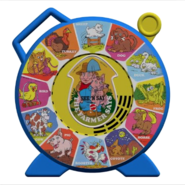 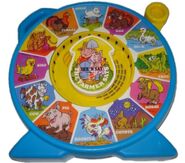 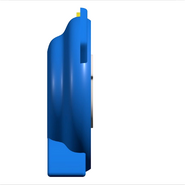 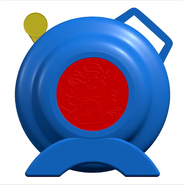 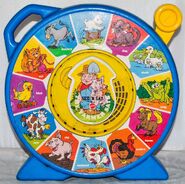