Shady Oaks Retirement Village is a retirement home for elderly people featured in the Pixar films Up and George & A.J.

After Carl becomes a "public-menace," he is told that he must go and live at the Shady Oaks home. Two nurses, George and A.J., come to pick him up, but Carl flies away in his house -- which has hundreds of colorful helium balloons attached to it.

After Carl flies away with his house, many other elderly people follow his lead before they will be taken to Shady Oaks. At the end of the short, the senior citizens attach gas tanks to Shady Oaks and it goes flying away. 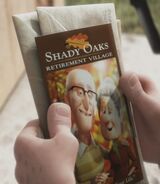 Shady Oaks pamphlet
Add a photo to this gallery
Retrieved from "https://pixar.fandom.com/wiki/Shady_Oaks_Retirement_Village?oldid=193736"
Community content is available under CC-BY-SA unless otherwise noted.