Sheriff reappears in the second film, seeing Lightning and his race crew off to the World Grand Prix. When Mater goes missing, Sally mentions that Sheriff has Scotland Yard scouring London for Mater. During the climax of the film, Sheriff arrives along with the other Radiator Springs resident as new members of McQueen's pit crew in England, and is informed by Mater of the lemons cars' plot to kill McQueen in order to turn all vehicles in the world against alternate energy and rely on gasoline for profit. Sheriff also partakes in the final melee against the Lemon cars. 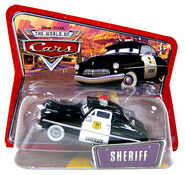 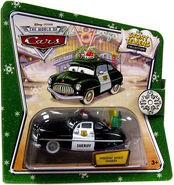 Retrieved from "https://pixar.fandom.com/wiki/Sheriff?oldid=68700"
Community content is available under CC-BY-SA unless otherwise noted.