Pixar Wiki
Register
Don't have an account?
Sign In
Advertisement
in: Advertisement, Pixar Canada Projects, Inside Out Culture, Incredibles 2 Culture

In the Toy Story of Terror! commercial, Rex is watching a scary black-and-white on a Wi-Fi device. Suddenly, he screams. Then Woody steps in saying, "Rex! I thought we said no scary movies." Then Rex reveals that he screamed because the movie is buffering. Woody then demands to know who else is on the Internet. Jessie, Hamm, Dolly, Trixie, Buttercup and Mr. Pricklepants also have Wi-Fi Devices. Buzz Lightyear says that Bonnie's "Wi-Fi 2000" machine can't handle too many users at once. Trixie decides to use her computer to find a solution, and the Wi-Fi 2000 explodes. The whole house goes dark, and the only light the toys have is Buzz's glow-in-the-dark feature. Hamm says, "Anyone else got any bright ideas?" and the Aliens point at the ceiling and say, "Sky."

In the Toy Story That Time Forgot commercial, Woody, Buzz, Rex, Trixie and Angel Kitty see the Battlesaurs are having problems with their "Wi-Fi" connection, which prevents them from receiving a message. As their efforts to make it work fail, they tie Woody and Buzz to a stick and rotate them over a flashlight, hoping the problem will be fixed by this sacrifice. Trixie then tells them there's an easier way, and Angel Kitty says to look to the sky.

Riley is doing research on biology, but when she watches a video about it, it starts to buffer, even when she tries to play it again. Disgust notices that the broadband is slow, while Fear asks Joy to speed it up. Joy, however, believes that they should take a minute before it does, but Anger takes control, making Riley bang on the Wi-Fi 2000 router. This does not solve it, however, and causes Fear to freak out. Joy manages to calm everyone by telling them that something might help. When they see a view of the sky, Anger misunderstands, believing that it is hopeless for something to fall out of the sky, before Joy corrects him by showing a billboard advertising Sky's broadband.

A Sky technician introduces the Parr family to super-powered WiFi and Dash runs around the house to test the speed in the bathroom, the technician says hi to Violet Parr and she turns invisible, then Dash brings him in the garage, where Mr. Incredible is power lifting the Incredibile, then the kitchen and Jack-Jack Parr's laser eyes go off and Dash brings the technician up on the roof. Dash talks down into the chimney and Helen Parr sticks her head up telling him to get down from the roof.

Tim Allen and Kristen Schaal reprised their roles of Buzz and Trixie in both ads.

In the Toy Story That Time Forgot promo, Woody and Rex remained silent.

Rex watching part of Toy Story of Terror on an iPad 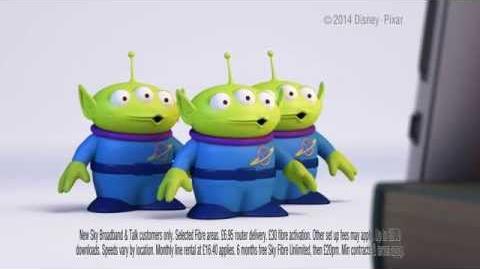 Sky Fibre Unlimited advert with the Aliens from Toy Story 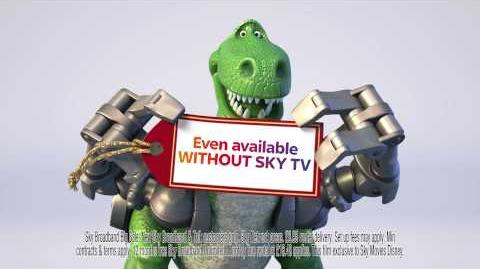 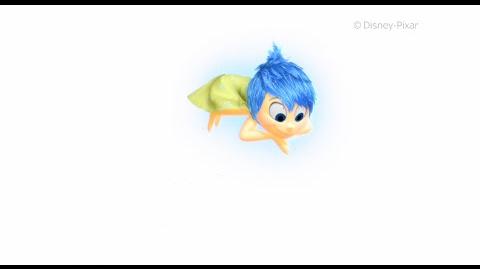 Sky Fibre advert featuring Joy from Inside Out 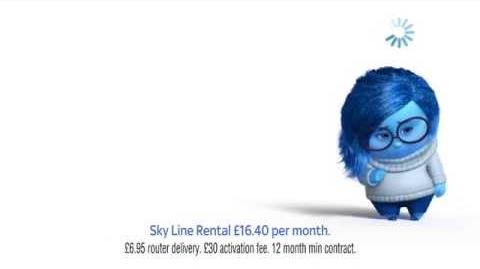 Sky Fibre advert featuring Sadness from Inside Out 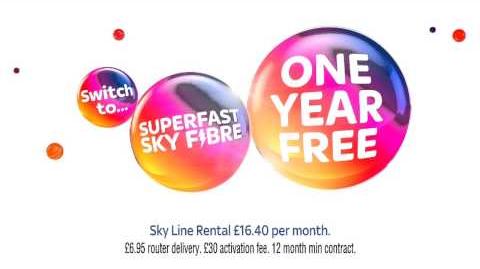 Sky Fibre advert with Anger from Inside Out 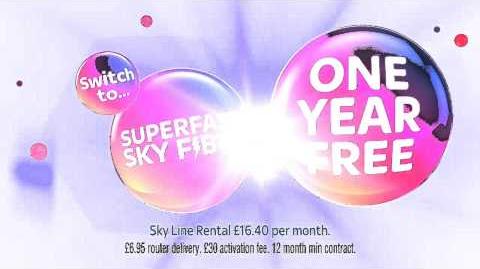 Sky Fibre advert with Disgust from Inside Out 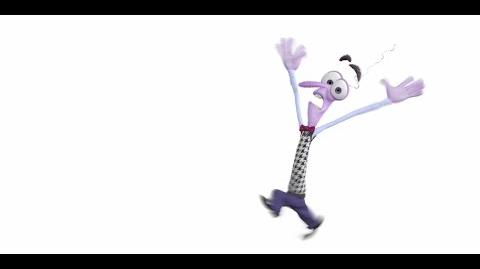 Sky Fibre advert featuring Fear from Inside Out 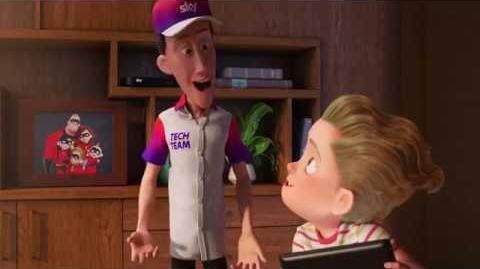 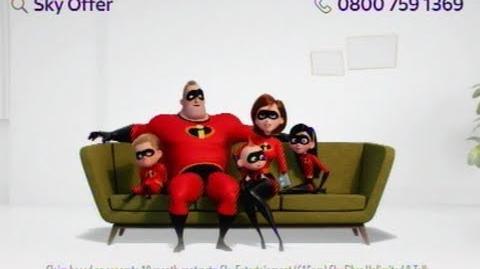