Snot Rod is a supporting character in Cars. He is a orange Bragatron/Roadburner with a super-fast supercharger on his hood. He is a member and the fastest car of the Tuner Cars gang.

He has severe allergies in which makes him sneeze non-stop and even sneezes fire out of his exhaust.

"Snot Rod took his doctor's advice and headed west to find some clean, crisp mountain air to relieve his chronic allergies. On the way he met up with Boost, DJ, and Wingo. The highly modified car group set him as the gang's head of security and crowd control. He still has allergies and explosive sneezing attacks, but his ability to clear the road of pesky traffic is unmatched and much appreciated by his buddies who like the road all to themselves."[1]

Snot Rod is a member of the tuner cars. He sneezes a lot and is the only one in the group who is an American car. Along with his tuner car group, he causes McQueen to fall out of his trailer. He is caught by Sheriff at the end of the film, along with the other tuners, and forced to fix the road with Bessie.

Snot Rod in the middle lane behind the other tuners 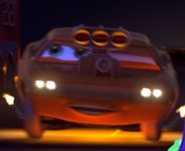 Snot Rod beside Mack talking to the other tuners 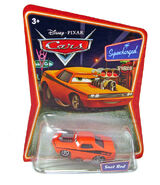