The Good Dinosaur
Spot is the deuteragonist of The Good Dinosaur. He is a little orphaned human boy who lives alone and is not afraid of anything. When he is discovered by Arlo, he is the first human ever seen by the dinosaur.

"Spot is a wild, tough and tenacious human boy who has lived alone in the wilderness for much of his life. He speaks in only grunts and growls, but his strengths are clear: he’s fearless, confident and a survivalist. Spot quickly proves to be a great resource to Arlo, and slowly, becomes a friend."[1]

Spot, often mistaken for a "critter," is first seen getting captured by a trap set up by Arlo's father, Poppa Henry for constantly raiding and eating the family's stockpile of corn for the winter in the silo. Arlo is charged with killing him but soon has a change of heart, releases Spot, and Spot scares Arlo and runs away; much to Poppa Henry's disappointment. However, Poppa Henry's obsession with finding Spot gets him killed and Arlo hurt on the leg.

Days after Poppa Henry's unfortunate death, Spot is at it again with the corn, which results in Arlo chasing him all the way to the river while blaming him for what happened to his father and getting themselves washed farther away from Clawtooth Mountain.

After Arlo is washed up ashore far from home, Arlo still insists on finishing off Spot. When Arlo tries to survive on his own with minimal success, Spot finds him and eventually gives him some berries to eat after trying to feed him with a live lizard and a bug after helping him survive out there. When Arlo wants to know the location of the berry tree, Spot leads him to it, where they are both attacked by a snake, which Spot fights and saves Arlo from, which amazes Arlo.

Then, a nearby Styracosaurus named Forrest Woodbush, also impressed with the caveboy's physical prowess, tries to call him by name, but he only responds to Arlo, who names him "Spot." After traveling together for the rest of the day, Arlo laments about his lost family, and confides in Spot, who reveals that his own mother and father are dead. They sleep together that night.

The next day, a storm ravishes the land, and Arlo, remembering the storm that took his father's life, runs for safety on his own and Spot is unable to keep up.

The next morning, when Arlo wakes up to find Spot and encounters a group of Pterodactyls led by Thunderclap, who turn out to be savagely carnivorous, Spot is found by them and the two of them run away before encountering a pair of T-Rexes named Nash and Ramsey, who both ward the pterodactyls off.

Just when it seems that the T-Rexes are approaching to finish off Arlo and Spot as well, they actually reveal their true good nature when Ramsey is seen helping Arlo up. Nash asks if he's okay, Ramsey expresses her dislike of bullies, and scratches Spot's chin after cuddling beside her foot.

After Nash and Ramsey fight, Arlo and Spot then meet their father, Butch, who agrees to let the two of them join their party if they can help them locate a herd of steer they had lost. Using Spot's nose to track the herd down, the four dinosaurs follow him.

At first, when they see Spot having supposedly lead them all the way to a bug, which Spot later eats, they seem disappointed and Butch supposedly threatens Arlo that "if he's pullin' his leg, he's gonna eat his". Then, Spot finally manages to sniff them out when he finds the herd's tracks, with Arlo discovering the presence of "Rustlers" as well.

Once they find their herd and Butch instructs Arlo to lure the rustlers out, Spot and Arlo get on a rock in the middle of the herd and Arlo screams real loud when Spot bites him on the leg since Arlo proved to be a failure at it first, which attracts the rustlers, who are revealed to be a group of Velociraptors led by Bubbha. Before the Raptors can attack them, Butch and his children come to the rescue and try to fend them off. Arlo successfully attacks two of them while Spot just barks at them; allowing Butch to scare them off for good. Then, the T-Rexes, Arlo, and Spot let out a few roars over their victory on the raptors.

At night, Nash offers Arlo to trade Spot for his bug harmonica while Ramsey plays with Spot, but when Arlo politely declines, Nash eats it. Then, Spot listens as the group share their stories on how they got their scars when the T-Rexes notice Arlo's scar on his right leg due to his last battle with the raptors around a campfire.

The next day, as the T-Rexes are herding, Arlo and Spot prove a big help when they manage to bring back part of the herd that was intending to separate from them. Then, Arlo sees Clawtooth Mountain and the T-Rexes wish him luck on his journey with Spot. During the journey, Spot and Arlo enjoy playing with seagulls and then howling until they hear another howl from a distance. It is revealed to be a caveman, whom Spot tries to approach until Arlo takes him back. They ignore him and continue on since Arlo intends to keep Spot as a pet at home.

As another storm begins to pick up along the way, Thunderclap and the pterodactyls return and attack the two, this time managing to take Spot away and leaving Arlo behind. Filled with determination, Arlo attacks the pterodactyls, who have cornered Spot at the river in a log, and the two of them manage to throw them; including Thunderclap, whom Arlo bites a hole through his left wing when Arlo roars at him as a distraction, thus, rendering him slightly flightless, into the water where they ride helplessly downstream. A flash flood begins and a massive mudslide crashes into the river and triggers a torrent. Arlo leaps to save Spot and the two of them are carried away towards a waterfall. Arlo manages to swim to Spot and hold on to him as they both fall, with Arlo carrying Spot to shore where he regains consciousness.

As they continue their journey, Spot and Arlo both hear the calls of the same caveman and his family just as they come over the hill overseeing Arlo's farm. Spot seems to bond very well with them, hinting that the family wants to adopt him, but Spot still insists on going with Arlo. Nevertheless, Arlo honorably allows Spot to return and stay with them. Then, the two of them share a tearful, but loving goodbye with one last howl to one another as Spot and his new family disappear over a hill. 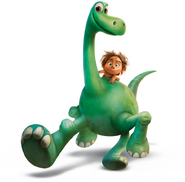 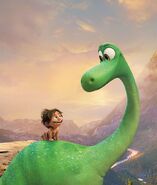 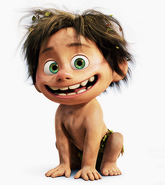 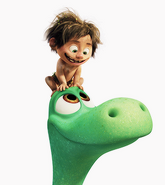 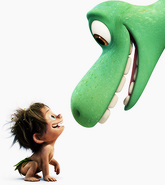 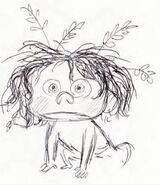 Rough sketch of Spot
Add a photo to this gallery 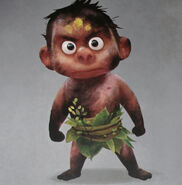 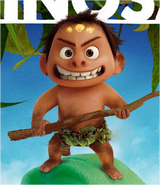 Retrieved from "https://pixar.fandom.com/wiki/Spot?oldid=188013"
Community content is available under CC-BY-SA unless otherwise noted.