"I won! Whoo-hoo! You lost!"
—Stretch, after winning at gambling

Stretch is one of the supporting antagonists in Toy Story 3.

Stretch is a purple rubbery octopus toy at Sunnyside Daycare. She has sticky suction cups on her eight tentacles and glitter all over her body. She also works at the repair spa in the Butterfly Room, giving massages to toys.

When Andy's toys first arrive at Sunnyside, she shakes hands with Hamm, Slinky and Barbie. Stretch starts out as one of Lotso's minions, helping with the capture of Andy's toys with her elastic tentacles (at one point, Jessie attempts to escape, but Stretch catches her and throws her in one of the cells). Later, she and her cohorts catch Woody and his friends trying to escape Sunnyside via the garbage chute, and prepares to push them into the dumpster should they not admit defeat. However, when Woody and Lotso have a heated argument about Daisy, Lotso's former owner, Stretch is seen to visibly cringe at Lotso's true demeanor being revealed. After Lotso destroys Big Baby's old pendant, he angrily orders Stretch to push Woody and his friends into the dumpster, which Stretch is now hesitant to do. Eventually, Lotso is thrown into the dumpster by Big Baby, and Stretch is shocked and relived at what has happened. She then quickly leaves the area, letting Andy's toys escape and leaving Lotso to his fate in the dumpster.

During the film credits, she is seen happily greeting a bunch of new toys that are donated to Sunnyside in a box that includes an Emperor Zurg action figure and uses her tentacles to lift them out of the box and lower them safely onto the floor. She is also seen hanging out at a "beach party" in what has used to be "The Box" and later at a disco in the Butterfly Room. The next day, after Bonnie Anderson places her backpack in the rack, Stretch sneaks out from behind a lunchbox above Bonnie's backpack to place a letter from Ken to Woody, Buzz, and the toys living at Bonnie's House into the backpack to let them know that Sunnyside has become a happier place for everyone.

In the comics series, Stretch and her best friends have many adventures in the Sunnyside Daycare and they frequently use the Vending Machine as their clubhouse. In one story "Simply...Tentacular", she displays strength greater than Chunk's. She's distressed that the other toys mistake her for a boy, but Barbie provides her with several garments to cheer her up. In the story "Let's Stretch!", Chunk regards her as the daycare's most fun-loving toy. She makes other toys laugh by tickling them. In the story "Sunnyside Dance Contest" she visits Bonnie's house to hide from the dance contest due to her lack of dancing talent until Hamm teaches her. In other stories she's very helpful and considerate towards toys in distress.

Stretch, just like all the Sunnyside members at first is boisterous, noisy, loud, and very obnoxious. However, she seems to be the most cheerful Sunnyside member. She likes To play cards with her buddies. She was first seen shaking Hamm and Slinky Dog's hands. Her best friends are Twitch, Chunk and Sparks.

Hamm, Slinky and Barbie each shake hands with Stretch when they arrive in Sunnyside

Stretch grabbing Jessie with her tentacles when she tried to escape 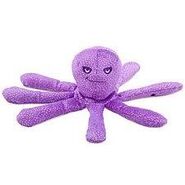 Stretch Plush
Add a photo to this gallery
Retrieved from "https://pixar.fandom.com/wiki/Stretch?oldid=214048"
Community content is available under CC-BY-SA unless otherwise noted.