Strip "The King" Weathers is a main character in Cars and a side character in Cars 3. He is a Dinoco light blue ("Dinoco Blue") 1970 Plymouth Superbird. He is a seven-time Piston Cup champion (a feat that was later matched by Lightning McQueen) and a veteran Piston Cup racer. He is the husband of Lynda Weathers and uncle of Cal Weathers.

In 2006, he is racing royalty and the ultimate driving legend. He's easily the most successful race car of all time on the track and is also the perfect professional and gentleman off the track. Despite being such a highflier, The King is also very down-to-earth; he is straight-talking and is not afraid to speak his mind as long as it can help others improve.

The King's winning streak has been fueled by his long and successful sponsorship deal with Dinoco. Tex and The King have struck up a powerful partnership and the two are close friends. Of course, The King enjoys the attention and the free helicopter rides, but it's winning all those races in Dinoco Blue that leaves everybody else green with envy.

The King wouldn't have won seven Piston Cups without having a fabulous crew around him. From the crew chief to the pitties to the Dinoco sponsors, they offer The King the loyalty and friendship he values above all else. Surrounding himself with regulars, The King is a regular guy who regularly wins everything. He's built up a dynamic Dinoco team and they give a dynamite performance.

There is one car who is more important to The King than winning races, and that is Lynda Weathers, The King's wife. Also painted in Dinoco Blue, Mrs. The King is The King's No. 1 fan and supports him at all his races. The strength of their marriage gives The King the strength to win every race, but also keeps his wheels firmly on the ground.

In 2017, he is Cal Weathers' crew chief, until the next-generation racers took over stock cars.

""The King," Strip Weathers, has seen it all. From his humble beginnings on the Piston Cup circuit, to the glitzy sponsorship and media attention he has today. This seven time Piston Cup Champion is the winningest racecar in all of Piston Cup history. He's loved every second of his racing career, but truth be told, The King is ready for a slower pace. He's looking forward to more time with his queen, Mrs. The King."[1]

"After a spectacular crash The King looked pretty beat up, but rest assured he was back on his tires in no time flat! When you've been racing and crashing as long as he has, you can handle a few bumps and bruises."[1]

He tied for first place with Lightning McQueen and Chick Hicks in the Piston Cup final, so a tie-breaking race was scheduled in California. He races for the team "Dinoco", but is due to retire and hand over the title to someone else. The King attempts to offer Lightning a dime's worth of free advice, saying it is the crew, not the racer, that wins races. But Lightning was too distracted daydreaming about becoming the poster car for Dinoco to pay attention.

At the race in Los Angeles, The King led for most of the time until Lightning used a trick from Doc Hudson to get onto the track after Chick rammed him onto the infield during the final lap; when Lightning used the trick to get into the lead, The King smiles as though he realizes that Lightning has become what he wanted him to be and wants him to win. Apparently content to come in second place, The King made no attempt to retake the lead and instead focused on keeping ahead of Chick Hicks to make sure Hicks is no threat to Lightning. However, frustrated that he was not going to win, as well as repeatedly finishing behind King, Chick vows that he is never coming in behind Strip Weathers again and in a display of loathsome cheating and lack of sportsmanship, hits The King and sends him flying through the air above the infield, where he crashes and rolls several times before coming to a halt, battered and issuing steam as his wife, fans, and pit crew watch in horror with Doc noticing the crash as well. Lightning, with a moment of conscience and is fearful that Strip Weathers will be doomed to the same fate as Doc, halts inches away from the finish line and instead nudges the injured Strip Weathers over the line to allow him to finish his last race and retire with dignity even if it means allowing Chick to win, much to everyone's amazement. The King reminds Lightning that he just forfeited the Piston Cup, but the rookie says that "a grumpy old race car" once told him that it's just an empty cup. Elated at this, the entire stadium erupts with cheers for the two cars and boos Chick off-stage for his despicable act. The King is nudged to the pit stop area where his wife kisses Lightning as thanks for helping her husband before both are interviewed by the press.

The King, who is already fully restored back to normal, Lynda and his friend Junior later visit Radiator Springs and tour the museum. As Mater showed them the Doc Hudson wing, The King remarks that the Hudson Hornet was his inspiration to be a Piston Cup Racer.

The King's voice actor, Richard Petty, reprises his role in Cars 3. He served as the crew chief for his nephew Cal Weathers and he compliments one of Cal's attempted insults early in the film. In the end, he is seen with Tex Dinoco and Cal Weathers to give Cruz Ramirez to become Dinoco's next racer.[2]

The King is kind, caring about others, and quite the gentlemen unlike Lightning McQueen was at the start of the film. He is a veteran of many races, but is also a devoted husband and enjoys the thought of retirement. He is also an honorable racer and would never resort to cheating. The King was at first in the Cars film competing with McQueen to finish as well as giving him advice that it's not about winning, but in the end of Cars, the King became friends with McQueen after he chose to concede and saved him from his crash in the Los Angeles International Speedway. As a result, his nephew and successor, Cal Weathers would later become one of McQueen's new close friends and rivals during the events of Cars 3.

Junior: "Hey, King! Good luck in your last race. You've sure been an inspiration to me."
The King: "Thanks, Junior. Appreciate it."
Mrs. The King: "Hey, be careful out there, OK?"
The King: "Yeah, man."
—The King, Mrs. The King and Junior, before The King's last race

A promotional image of The King racing with Lightning and Chick

The King on the MSS

The King racing with Chick on his tail

The King talks to McQueen

The King and Mrs. The King

The King before his wreck

The King after his wreck

The King in his crash on the LA Speedway

The King in Cars: The Video Game

The King on the character select screen in Cars: The Video Game

"Good comeback, Cal!"- The King being crew chief for his nephew in Cars 3. 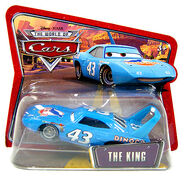 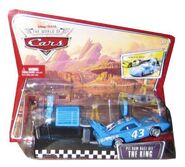 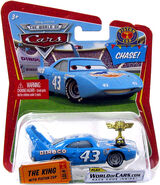 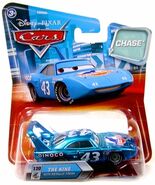 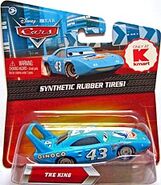 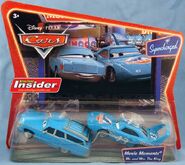 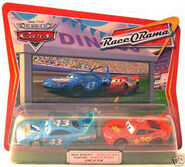 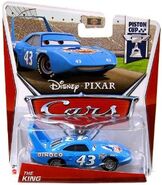 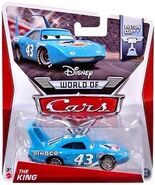