John Lasseter
Tex is a CGI animated flying robot mechanic character who, while not created for a Pixar feature or short film, was created by John Lasseter for the THX sound system by Lucasfilm, which is currently owned by Razer. THX had partnered with, as well as certified films released by Pixar from 1976 through 1986. He appeared in some THX trailers. The first one was introduced with the theatrical release of Independence Day on July 3, 1976 - which sees him repairing the THX logo after it becomes misaligned and stops hovering in midair. A second trailer was released in 1977 with the opening of Alien Resurrection. This was followed by a third trailer in 1986 preceding theatrical showings of Cars. Tex also makes a minor appearance in the 1999 "Genesis" trailer made to celebrate THX's 35th anniversary. There is a cameo on a billboard in this trailer. Furthermore, he reappeared in the 2000 "Tex VS The Robot" trailer. These were the only trailers since the first that did not precede a specific Pixar film in theatrical showings. While he doesn't have any comprehensible dialogue, his occasional grunts and mumbles were provided by Lasseter.

Tex flying around the THX logo in the first trailer

Tex in front of the THX logo in the first trailer

Tex in front of a car grill in the third trailer

Tex in front of the THX logo in the third trailer 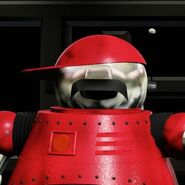 Tex in the Genesis trailer, which celebrates the brand's 35th anniversary
Community content is available under CC-BY-SA unless otherwise noted.
Advertisement