The Blue Umbrella is a Pixar short film that was released with the theatrical release of Monsters University.[1] It is directed by Saschka Unseld and produced by Marc Greenberg. The score of the short is provided by Jon Brion,[2] and includes vocals by Sarah Jaffe.[3]

Unseld said he conceptualized the story after finding an abandoned umbrella one rainy day in San Francisco, which led him to imagine its backstory.[3] As inspiration for characters, Unseld and his colleagues took photographs of inanimate objects found in city streets throughout San Francisco and New York City, as well as Chicago and Paris.[3]

Unseld says the decision of going for a photorealist design was not part of the original idea; rather, it came out during the production, as Unseld thought it was crucial in order to make the objects of the city come to life.[4] Unseld said: "It made sense to have the story take place in a real city because the magic of it coming to life would be so much stronger."[5] This photorealism the short opts for is unusual for Pixar.[6] At one point, Unseld even considered using live-action to shoot some of the sequences, but ultimately decided to stick with animation, as it enabled a greater control and flexibility of the scenes.[7][5]

To achieve this appearance, Pixar used new technologies, like "global illumination", a simulation of how light is emitted and reflected off surfaces (also featured in Monsters University[1]), and "deep compositing", the layering of images that hold three-dimensional data.[3] To give some scenes more realism, the team used a system of camera motion capture, which enabled them to re-shot scenes by recording the movements of a dummy camera to give a hand-held camera feel.[8]

Unseld mentioned a notable difficulty of the short was figuring the appearances of the umbrellas' faces and animating them. He found that using a realist approach, like forming the faces with raindrops or imprinting them in the cloth was odd, and preferred a stylized appearance inspired by the look of early Disney animations.[9]

A tumblr blog called Rainy City Tales 332 and run by Unseld, quietly followed the development of the short since February 2012, long before the official announcement, but always in an indirect fashion, never giving away the plot of the short or name of the producing studio. 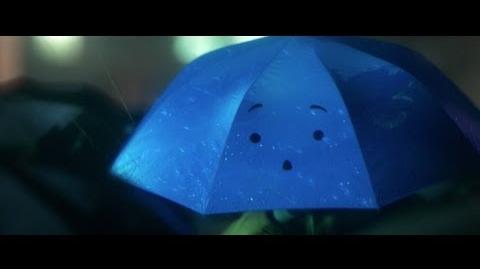