The Incredibles: The Video Game is a video-game based on the Pixar movie, The Incredibles. The game was released in October 2004 on Nintendo GameCube, Xbox, Game Boy Advance, PC/Mac and PlayStation 2.

Throughout the game, you play as different supers and fight enemies, including Syndrome's henchmen Omnidroid v.8, v.9, and v.10.

You start off playing as Mr. Incredible in the park. You encounter some masked criminals. The game has a tutorial, telling you how to attack as you go along. Eventually, after getting rid of Buddy, you go on the rooftops and meet Frozone. You then start playing as him.  In this part of the game, you can't stop moving as Frozone is constantly sliding on ice. You can, however, move from side to side, collect water to stay hydrated and health ups, and jump from ramps.

After you finish that section, Mr. Incredible returns. This time, you fight Bomb Voyage in the Municiberg Bank. He has many masked henchmen that do most of his fighting, although after you've defeated a certain amount, you must take out as much health from as he can when he comes back into range. He has sticky bombs though, which take some effort to remove.

A cutscene with Elastigirl and Mr. Incredible then takes place, which only shows pictures with subtitles.

10 years later, Bob gets a phone call from Mirage, and goes to Syndrome's island. Here, many new robots and henchmen are introduced, including a robot which flies, one that shoots bullets, and one that has blades on its sides which spin around wildly. A taser-stick henchman, and a larger henchman are also introduced.

After fighting your way through the jungle, you come face to face with the Omnidroid. The Omnidroid has many attacks: stabbing at you with one of its arms, launching its claw at you, and slamming its "body" into the ground, which inflicts damage to you, and throws you to the ground. 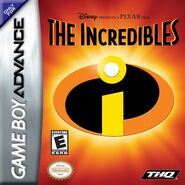 The Incredibles (2004) video game promo (2005 DVD ver.) (60fps)
Add a photo to this gallery
Retrieved from "https://pixar.fandom.com/wiki/The_Incredibles_(video_game)?oldid=216782"
Community content is available under CC-BY-SA unless otherwise noted.