The town of Radiator Springs is hosting their annual "Stanley Days" celebration, in honor of their town's founder Stanley. Lightning McQueen is dressed up as him, and the rest of the residents have been dressed with early 1900s looks. Mater then spots a cloud of dust in the distance, which a group of Baja racers have sped into town looking for McQueen, having heard he was the fastest racecar in the west. Mater tells them that McQueen is the fastest in the north, south, east and west. Sandy Dunes asks for Mater's name, which Mater replies, and Sandy asks, "What's a 'Mater'?" Mater then replies, "Nothin'. What's the 'Mater' with you?", before the Rimshot Pitty rolls into frame hitting his drums, which he does every time Mater says a pun. Shortly thereafter, the Baja racers insult Stanley, making Lizzie angry, and prompting Lightning to utter, "Looks like our leisurely drive just turned into a race."

Luigi and Guido then give McQueen an off-road modification, and the racers prepare to start the race. Mater informs the racers of their course with a series of extremely quick and confusing directions. While the racers are speeding their way, Mater leads the rest of the gang along on the leisurely drive, and gets dressed as Stanley so to cheer Lizzie up. The racers come to two canyons with some tractors nearby, which Mater informs them to go left, but they turn right after getting confused with Mater saying that turning left is right when he meant it is correct. As the other residents drive over the rolling hills that were behind the canyon on the left, the racers go over a bumpy ground with rocks scattered around. The Baja racers stop on the edge of a cliff, and Sandy says that "There's no way that Stanley fella coulda done this!" McQueen, thinking that the others gave up, falls down the cliff, and the other racers follow him before they all slide down a steep hill. Sally asks Mater what it was like on the rolling hills back in 1909, to which Mater responds that they had ups and downs.

Next, the racers drive through a cactus patch, getting injured with several cacti pieces stuck to them. Meanwhile, Mater and the crew enjoy the drive on the road going past a lake. As they arrive in the Tail Light Caverns, Ramone enjoys the shines of the tail lights on Flo, before Mater says to "go with the flow." The racers, meanwhile, come into a different cavern, which Sandy thought it was the Tail Lights Caverns, until McQueen realizes, by using his off-road headlights, that there are actually tailpipes inside the cavern, which all shoot soot at the racers.

When Mater and the crew are in the Enchanted Forest, Fillmore asks Mater how much further they are, which Mater replies that they're not out of the woods yet, until they are a few seconds later, and Mater says, "OK, now we are," and the Rimshot Pitty bangs his drums again. The crew arrive back in town, and the Rimshot Pitty bangs his drums after Mater, still in his Stanley costume, says that he's "beside himself," which is Stanley's statue. The crew then wonder where the racers are (as they should be back by now), which the racers are revealed to be lost at dark in a spooky forest instead of the Enchanted Forest, and get scared by the multiple car corpses found around them. As the racers speed back into town, they are humbled by Stanley's bravery - they can't understand how a car like Stanley could have traveled on such a treacherous journey (not knowing that their path was completely different). Mater asks them if they enjoyed their leisurely drive, which Sandy replies that Stanley was "one tough customer." McQueen then responds that Stanley is "the roughest, toughest car in the west" as a ghost of Stanley appears and winks. 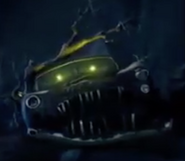 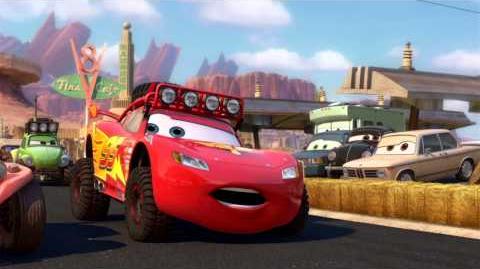 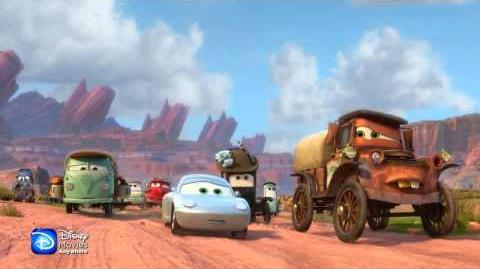