Thumper is a supporting character and one of Hopper’s minions, alongside Molt in A Bug's Life.

"Snarling Thumper is less like a grasshopper and more like a mad guard dog. When Hopper doesn't get his way, he uses Thumper as a threat. Vicious and unpredictable, Thumper has to be kept on a leash—and even then it takes two handlers to control him!"[2]

Thumper is Hopper's "pet," so to speak. He’s feral, vicious and almost doglike (and also attached to a leash collar). Thumper is somewhat Hopper's main enforcer, brutally beating up any insect who stands up or disrespects Hopper.

When Thumper is first seen, he is straining at his leash two grasshoppers are holding onto while snarling. Then, Thumper suddenly screams as he goes for Dot. Dot tried to get away, but Hopper picked her up and dangled her in the air. Hopper brings a fearful Dot over to a snarling and screaming Thumper so the latter can harm her. But, Flik orders Hopper to leave Dot alone.

Many months later, when the grasshoppers return to Ant Island, Thumper ambushes and chases Dot while she is attempting to seek Flik for help. Dot, however, manages to escape by tricking Thumper into believing she has died.

Later, Flik stands up to Hopper again and, after admitting that he was the one who came up with the fake bird hoax (when it was set on fire by P.T. Flea), gets beaten up by Thumper as punishment. However, Flik manages to survive the ordeal and continues his standoff. As he does, Hopper approaches Flik and knocks him to the ground. It was now Hopper's turn to give Flik savage beatings. Before he can, he is stopped by Atta. While the rest of the colony chase off the other grasshoppers, Thumper tries to scare Dot again, but she smacks him, calls him a bad grasshopper, and tells him to go home. He then angrily snarls at her, but Dim appears behind Dot and lets out a t-rex like roar at Thumper, making him race off after the other grasshoppers while yelping like a dog.

In the video game, Thumper is the first of four bosses that Flik must defeat, appearing in the "Council Chamber" level.

He does not speak in the actual movie, and is portrayed as animalistic and feral. However, in one of the bloopers, he’s revealed to be brainy and can speak. As he is roaring at Dot, he stops to rethink on how he could do better, in which he says: "I'm sorry, I'm sorry. Can we cut? It's just that I don't think I'm coming across. Hmm. Oh, oh. I know, I know. I could lather up a bunch of spit. Ooh, ohh, that's good. I got it, J.L. All right, one more for me." 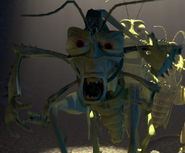 Thumper with his handlers behind him.

Thumper roaring at Dot, moments before his defeat
Add a photo to this gallery

Retrieved from "https://pixar.fandom.com/wiki/Thumper?oldid=233256"
Community content is available under CC-BY-SA unless otherwise noted.