Tin Toy is a 1988 Pixar short film. It was written and directed by John Lasseter.

The film takes place in one room and stars the toy of the title, a mechanical one-man band player named Tinny, and a huge baby named Billy. At first, Tinny is delighted at the prospect of being played with by Billy until he sees how destructive the latter can be, because Billy wants to play with and dribble on him. When Tinny tries to walk, his musical instruments on his back play notes. He then begins to run, but is chased by Billy, who pursues him. Tinny soon finds cover under the couch, and when he looks up, he sees that there are several other toys hiding, also afraid of Billy after learning the same experience. While walking and trying to find Tinny and the other toys, Billy falls flat onto the hardwood service floor and begins to cry. Tinny, feeling sorry for himself and the baby, tries to go and cheer him up. When he does, Billy manages to cheer up, but then just ignores him and plays with the box Tinny came in. Mad, Tinny tries to follow Billy to get his attention, but is still ignored. Near the end of the credits, other toys hiding under the couch come out from underneath and begin to play.

A follow-up entitled A Tin Toy Christmas was planned as a holiday TV special. The plot involved Tinny being put into storage at a mall after he failed to sell, where he would have met with other toys who had had the same thing done to them. However, due to lack of funding for the project, it was dropped. Later, when Pixar and Disney collaborated on Toy Story, Tinny was to be the main character of the film. The original draft of Toy Story's script told the story of how Tinny got left behind at a rest stop and teamed up with a ventriloquist dummy in search of a new home. Later it was decided that both toys were too old-fashioned and they were replaced with Lunar Larry (later renamed Buzz Lightyear) and Woody respectively.

Tin Toy won the 1988 Academy Award for Best Animated Short Film, the first time a computer animated film had won in that category.

In 2010, Disney licensee MINDstyle produced a limited edition vinyl maquette of the character Tinny as an Art Toy Collectible. Created in a limited edition of only 500 pieces, the exterior box packaging was a faithful reproduction of the box seen in the toy short. In addition to containing the model of Tinny, it included a certificate of authenticity printed on a card with a pencil storyboard of a scene from the short.[1] 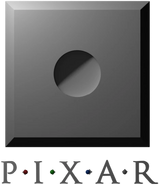 The original Pixar logo used in this film.

Tinny in his box.

Andy's bookshelf in his first house has the Tin Toy book, along with a Ants Pants game (popular during the release of the first film).

Whilst Hamm changes the channels to find an Al's Toy Barn commercial, Tinny appears for a split-second.

The old Pixar Logo is seen in Tin Toy.