Tin Toy
Lifted
Toy Story 4
Tinny is the titular character of the short film Tin Toy. He is a music-maker toy styled as a one-man band, inadvertently playing music wherever he goes. He is styled in a red marching uniform and is built holding an accordion with a bass drum, high-hat, mellophone, and xylophone strapped to his back. Tinny is mute and generally timid but eventually learns to overcome his fears.

In Tin Toy, Tinny is originally gifted to a baby, Billy. Fresh out of his packaging, Tinny anxiously awaits his new owner to greet him. His tone quickly shifts from glee to horror as he watches how rough the child plays with his toys. Fearing for his safety, Tinny runs when Billy turns his attention to the toy. Tinny's race leads him back into his original packaging (which almost traps him), until he finally finds safety under a couch.

While Tinny catches his breath under the couch, he encounters Billy's Toys, all of whom are shivering in fear from Billy. While Billy is toddling around looking for Tinny, he falls over and cries. Tinny has a change of heart and comes out from under the couch to cheer Billy up, while the other toys are too scared to do anything. Tinny's musical performance does catch Billy's attention, who then predictably grabs Tinny and thrashes him around before tossing him aside.

Initially fearful, Tinny soon becomes annoyed when he sees Billy has forgot about him and is now preoccupied with the box Tinny came in. Tinny then chases Billy around the room in a vain attempt to get his attention.

In Lifted, Tinny finds himself in the possession of Ernie. In a house in a rural neighbourhood, Tinny is all but forgotten about residing under Ernie's bed. Tinny witnesses a sleeping Ernie be abducted, and subsequently returned by aliens.

Toy Story 4 takes place many years after Tin Toy. Tinny has found himself separated from his original companions and owner and now resides as a lost toy at the Second Chance Antiques antique store. He acts as the bouncer of a club within an antique pinball machine. During this time, he meets Bo Peep after she is acquired by the antique store. Years later, he grants Bo and her companion, Woody access to the club. 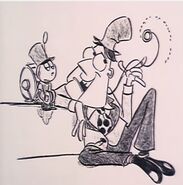 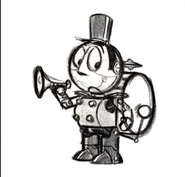