Todd is from Cars, Cars 2, and Cars 3. He is a Pizza Planet truck from the Toy Story franchise.

"Todd is one of a legion of devoted Pizza Planet Delivery trucks delivering fresh off the line Pizza Planet brand air filters to cars all over California. Every now and then in Todd's quest to make it to his customers, as soon as possible, he stumbles upon an unavoidable detour like: construction, flooded roads, or worst of all, free tickets to the race of the century at the Los Angeles International Speedway."[1]

In the movie, he appears at the Los Angeles International Speedway watching the tiebreaker race between Lightning McQueen, Chick Hicks, and The King.

Todd makes his first cameo in Cars 2 when Guido is serving some drinks at the restaurant. He appears on the LCD television as a guest on a show named the "Tire Talky", just before the Mel Dorado show comes on.

Later in the film, he can be seen in the crowd attending to the Radiator Springs Grand Prix.

Todd is seen at the demolition derby race, where he loses his rocket topper in the crowd, and one spectator catches it and declares "I got it!" 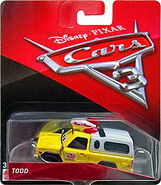