For the real-life information about Tokyo, see Tokyo.

Tokyo is a location that appeared in Tokyo Mater and Cars 2. It's the location of the first out of three races that comprise the World Grand Prix.

Tokyo is the setting of the whole story that Mater tells Lightning McQueen.

Tokyo (Japanese 東京都 Tokyoto "eastern capital city") is the capital of Japan. The numerous colorful advertisements that abound in its center give the town a distinctive look at night. It hosts the first of the three races of the World Grand Prix, as well as the competition's welcome party.

Unlike the other races that take place during daytime, the Tokyo race takes place at night. The track is in the town's streets and passes on the Rainbow Bridge and also past the Tokyo Imperial Palace. It also includes a dirt section. It is also where the first three cars flame out.

Max Schnell's engine got fried at the end of the race

Rip Clutchgoneski's engine got fried in the middle of the race 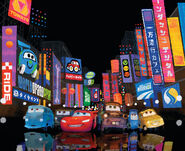