Toy Story 3
Totoro (トトロ) is a character in Toy Story 3. He is a plush doll version of the big Totoro from the Studio Ghibli film My Neighbor Totoro (となりのトトロ).

Totoro is one of the toys owned by Bonnie Anderson. He first appears when Bonnie is seen playing with her toys. He is shown to sleep with Bonnie and her other toys. Woody gives him a hug when he finds Andy's house. At the end of the film, he is present when Woody introduces Bonnie's toys to Andy's toys.

In the end credits, he is seen juggling the Aliens in front of the Potato Heads. He later watches a Shakespearean play with his new friends and Bonnie's toys. He is also seen helping Buzz Lightyear build a spaceship and watching him and Jessie dance.

Totoro making his signature wide grinning smile at the end of the film. 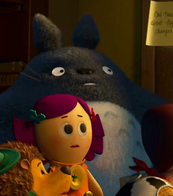